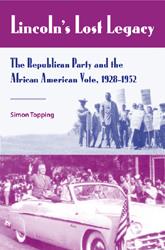 "Sheds new light on the politics of race during the New Deal/World War II era and shows the deep historical origins of the current difficulty the Republican Party has in winning African American votes."--Timothy Thurber, Virginia Commonwealth University

"Offers a compelling and insightful account of the reasons for African American disenchantment with the GOP and for Republican neglect of black voters. Impressively breaks new ground in the historiography both of the Republican Party and of African American politics. The result is an important contribution to our knowledge of a key twentieth-century political development."--Robert Mason, University of Edinburgh

During the 1930s and 1940s, many African Americans left the Republican Party and joined ranks with the Democrats. Before this time, the few blacks actually able to exercise their franchise automatically voted for the party of Lincoln and emancipation. The resulting political realignment has had numerous and far-reaching impacts, including the 1948 election of Harry Truman.

In Lincoln's Lost Legacy, Simon Topping examines how the Republican Party lost black voters, what they did to try to win them back, retain them, and why they failed. His work helps put current Republican problems with African American voters into a longer historical framework.

This finely detailed look at the making of politics and policy investigates the evolving relationships between African Americans and political parties, ultimately revealing how political leaders' decisions or indifference can carry enormous repercussions for the rest of society.

Simon Topping is lecturer of American studies at the University of Plymouth.

" The close history provided of the NAACP and other African-American organizations and influential figures, along with the sustained and detailed account of American politics over the central decades of the 20th century make this a text that will appeal to a broad readership."
--SciTech Book News

" An absolute must-have for any library or private collection strong in American political history."
--The Midwest Book Review

"In this well written narrative, Topping sets out to determine when and why the Republican Party lost support among African Americans. Recommended."
--CHOICE

"Topping offers a new and welcome perspective on the political realignment of the New Deal era."
--The Journal of American History

"An interesting and scholarly book on a topic that has been largely neglected by historians."
--American Historical Review

"A well-written, well-organized book that makes good use of a broad range of archival and public sources. It will be a helpful resource for those studying the politics of the Roosevelt and Truman eras."
--Journal of American Ethnic History

"Offers a sharp and insightful political history for those interested in presidential politics or executive authority."
--Journal of African American History - vol 94 no 1