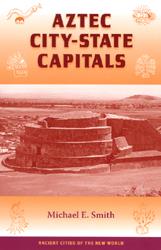 "Brings together scattered data not easily available elsewhere on the Aztec city-states apart from Tenochtitlan. Smith presents a convincing argument that these capitals are cities with significant political and ideological urban functions."--Edward B. Sisson, University of Mississippi

The Aztecs ruled much of Mexico from the thirteenth century until the Spanish conquest in 1521. Outside of the imperial capital of Tenochtitlan, various urban centers ruled the numerous city-states that covered the central Mexican landscape.

Aztec City-State Capitals is the first work to focus attention outside Tenochtitlan, revealing these dozens of smaller cities to have been the central hubs of political, economic, and religious life, integral to the grand infrastructure of the Aztec empire.

Focusing on building styles, urban townscapes, layouts, and designs, Michael Smith combines two archaeological approaches: monumental (excavations of pyramids, palaces, and public buildings) and social (excavations of houses, workshops, and fields). As a result, he is able to integrate the urban-built environment and the lives of the Aztec peoples as reconstructed from excavations.

Smith demonstrates the ways in which these city-state capitals were different from Tenochtitlan and convincingly argues that urban design is the direct result of decisions made by political leaders to legitimize their own power and political roles in the states of the Aztec empire.

"In this excellent book Michael Smith adds significantly to our knowledge regarding Aztec cities, as well as engaging with wider debates about the nature of urban settlement." "A fascinating and accessible work which deserved to be widely read amongst both Mesoamerican specialists and readers with more general interests in urban history."
--Journal of Urban History