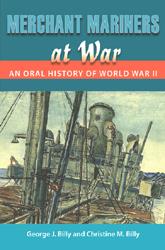 "An epic account of survival against the enemy and the elements of nature."--Gene Allen Smith, series editor

Thousands of cargo ships sailed in both the Atlantic and Pacific theaters of World War II manned by young men who braved blockades, torpedoes, and bombings to deliver vital supplies to the Allied forces and make victory possible. These mariners have received little if any credit; they are the forgotten group of "the greatest generation."

Merchant Mariners at War offers firsthand accounts of the wartime experiences of veterans who graduated from the U.S. Merchant Marine Academy--the largest supplier of ships' officers in WWII. Gathered over more than a decade at the academy in Kings Point, New York, the interviews offer a unique portrait of the young officers who delivered the vital war materiel and provide a valuable window into the world of the merchant marine during WWII. The stories often include startling accounts of privation and endurance.

Their stories give voice to a new perspective on WWII maritime history. Chapters cover such subjects as Liberty ships, U-Boats, the Battle of the Atlantic, D-Day, the Philippines, the vast Pacific, and the Murmansk Run. Throughout the book, interesting anecdotes from the veterans enliven the narrative and add to its contribution to the historical record--heretofore non-existent.

"When you finish reading 'Merchant Mariners at War: An Oral History of World War II', you will have new or renewed respect for the men who sailed the ships that carried the cargo of war during the Battle of the Atlantic, the Murmansk run to Russia, across the broad Pacific and the sunny Mediterranean. The way history should be written."
--The Midwest Book Review

"By focusing on cadet-midshipmen from Kings Point, it makes a unique addition to the literature."
--History: Reviews of New Books

"A fine portrait of the men and ships who made victory possible. The stories of privation, hardship, and heroism captured in this book will go a long way in convincing readers of the vital role played by this neglected branch of service."
--WWII History

"Anyone who reads these accounts will be reminded of the vital contributions provided by the men of the merchant marine, and of the sacrifices they made during that most challenging time in American history."
--Nautical Research Journal

"A good addition to the literature of the war at sea."
--The NYMAS Review

"Provides an interesting selection of anecdotes which will undoubtedly complement other oral history collections concerning the merchant crews of the Second World War."
--War in History

"An excellent addition to the literature of the war at sea."
--New York Military Affairs Symposium Newsletter

"Some of the stories are rather peaceful, but the recollections of those who had ships torpedoed or bombed out from under them or faced kamikazes off Okinawa and Iwo Jima read like great, terrifying novels of the sea that you don't want to put down. One man had two ships shot out from under him on the same voyage. Almost all of the officers recall friends on other ships in their convoys who didn’t survive the journey. A good book, and it does an admirable job of relaying the stories from a major part of the United States' effort in World War II."
--The Journal of America's Military Past Volume XXXV, No. 3