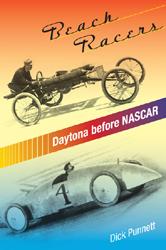 "Captures the excitement of the early twentieth century automotive industry and the automobile racing tournaments held on the beaches of Ormond and Daytona Beach. In the process, Punnett effectively separates truth from fiction."--Daniel Pierce, author of White Liquor and Red Clay: NASCAR in the Era of "Big" Bill France

"Punnett not only sets the record straight on the Ormond-Daytona Beach initial racing tournaments, he does it in a very readable style that will hold the interest of both the serious historian and the inquisitive fan."--Russell Jaslow, autoracinghistory.com

Every spring, hordes of fans descend upon Florida for the Daytona 500, the famed first race in the NASCAR season. But how many know that racers have been bringing fast cars to the beach for more than one hundred years?

Beach Racers portrays the thrills and dangers of the first automobile races in Daytona. In an era of poor roads, the flat, wide sands of Ormond and Daytona beaches proved to be the ideal venue for engineers and drivers pushing the technological envelope, looking for ways to make their cars go ever faster.

For nearly a decade (1903-1910) land speed records were routinely set and broken by automakers such as Mercedes, Winton, Napier, Darracq, and Stanley Steamer thanks in part to financing from such business tycoons as Stanley brothers and Vanderbilt. Dick Punnett has scoured libraries, auto museums, and historical societies throughout Florida, the Northeast, and the Midwest to track down stunning photographs and primary sources to learn what really happened during these early races.

Filled with riveting photographs, fascinating anecdotes, and authoritative lists of winners, contestants, and record-setters, Beach Racers is a must-have for every true fan of NASCAR.

Dick Punnet is a long-time resident of Ormond Beach. His first book, Thrills, Chills, and Spills--written with his wife, Yvonne--is a photographic history of early aviation on the beach.

"'Beach Racers' portrays the thrills and dangers of the first automobile races in Daytona Beach."
--The Daytona Beach News-Journal