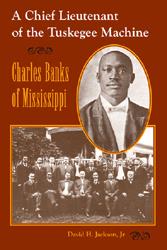 A Chief Lieutenant of the Tuskegee Machine
Charles Banks of Mississippi


"An original and informative biography that helps us understand that the American spirit--in its many shades--can never be suppressed."--Maceo Crenshaw Dailey Jr., University of Texas, El Paso

"Sound and well argued, readable and engaging. . . . The life and business career of Charles Banks shows Booker T. Washington's racial strategy in action, with all its strengths and weaknesses, as a modus vivendi for the age of segregation."--Louis R. Harlan, professor emeritus, University of Maryland

This scholarly biography is the first book-length volume to examine the life and work of Charles Banks, Booker T. Washington's chief "lieutenant" in Mississippi, who became the most consequential African American leader in the state and one of the South's most influential black businessmen in the early decades of the twentieth century.
David H. Jackson, Jr., presents a new perspective on Booker T. Washington and the Tuskegee Machine that counters its more familiar image as conniving, heavy-handed, intolerant, and ruthless. In a rare look at the machine's inner workings, the book discusses the benefits of membership and the often-unacknowledged fact that involvement with the machine was mutually beneficial for Washington and his supporters. Jackson argues convincingly that Washington did not keep his key men, "lieutenants" like Charles Banks, on a leash; indeed, his effectiveness depended largely on these figures, who promoted his agenda in various states. Part of Banks's significance was his success in delivering Washington's program in a way that was palatable to blacks in the South--especially in Mississippi, a state historically known for its economic deprivation and racial unrest.
The book also presents the first comprehensive golden-age history of Mound Bayou, Mississippi, an all-black township that Banks's business acumen helped shape economically.
Contrary to the accommodationist view, Jackson profiles Banks through a constructionist framework to reveal a strong yet conflicted black leader and follower of Washington. His development was shaped by rural poverty, white supremacy, the dominant influence of the philosophy and personal power of Washington, and the concept of the all-black town as a strategy for avoiding some of the worst economic and psychological effects of discrimination.

"This significant contribution to historical scholarship explores aspects of the past that are relevant to an understanding of the present. Those interested in American history in general and the African American and southern experiences in particular will read this work with great profit." -The Alabama Review/Willard B. Gatewood, University of Arkansas, Fayetteville
--The Alabama Review

"A fascinating account of the African American struggle to prosper in Jim Crow Mississippi." "Jackson provides an invaluable snapshot of a time just before strategies of accommodation proved desperately inadequate."
--H-Education

"A valuable addition to the literature on the 'Wizard of Tuskegee' and those who adhered to his philosophy."
--The Journal of Southern History