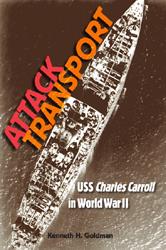 Tells the service history of the "Lucky Chuck," which earned six battle stars during WWII

"Offers a cascade of authentic information and 'flavor' on going to sea that I recognize as quite authentic from my own experiences, and gives rare insights into wartime naval service of a ship type not usually covered in the spate of 'war as I knew it' memoir. The shipboard routine reveals itself in gritty and authentic prose."--Kenneth W. Estes, author of Marine Officer's Guide

"Fills a marked gap in our knowledge of the period; namely an up close and personal view of the brave men and gallant ships handling the various D-Days."--William O. Oldson, director, Institute on World War II and the Human Experience, Florida State University

In November 1942, the amphibious transport ship USS Charles Carroll carried troops from Norfolk to invade North Africa. In 1945 it was transferred to the Pacific for the invasion of Okinawa. In between, the "Lucky Chuck," as the ship was fondly known, participated in the invasions of Sicily, Salerno, Normandy, and southern France.

Kenneth Goldman's father, Lt. Robert W. Goldman, USNR, was aboard ship for five of her six battle operations. As a junior officer (he eventually became the ship's navigator), he held a high security clearance and saved a large portion of the documents to which he was privy. These invasion maps, photographs, ship's plans of the day, convoy position orders, enemy force assessments, and more form the backbone of Attack Transport.

Yet Goldman graciously keeps his father out of center stage in telling the "life" of a ship that participated in almost all of the major U.S. amphibious assaults in the European Theater. Using weathered diaries and letters from other crew members, along with their memories of service, he captures the humor, boredom, combat fears, and capers on liberty that give this view from the lower deck a charm that operational histories do not have.

Kenneth H. Goldman is a screenwriter, sculptor, and model maker who lives in southern California.

"A good record of the wartime career of the ship and the men who served on board, but it also draws an equally good picture of the services performed by the attack transports of the U.S. Navy in World War II."
--Warship International

"A definitive cradle to grave academic account of a frontline World War II attack transport. That it is richly illustrated and told in a warm and inviting style using a chorus of veteran voices, will further enhance its stature in the historiography of the oft neglected subject of amphibious assault ships. This will surely ensure this book a lasting place in the literature of World War II amphibious operations."
--The Journal of Military History

"Stands as an important addition to the literature of American naval vessels during World War II and illustrates the essential role played by these types of vessels in a conflict that depended on sea transportation as the linchpin for success."
--International Journal of Maritime History

"An excellent contribution to the naval history of World War II and the unheralded auxillary vessels that played such a vital role in the allied victory."
--The Journal of America's Military Past

An essential read for anyone interested in amphibious operations.
--Strategypage.com