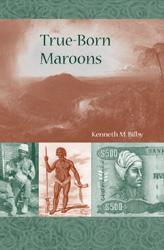 
"An impressive ethnography of identity and cultural memory among the little-known Windward Maroons of eastern Jamaica, descended from escaped slaves who established free communities in the mountains of this New World colony a century before the abolition of slavery. This book is an essential and rewarding read for all those interested in resistance to slavery in the Americas and its legacy today."Jean Besson, Reader in Anthropology, University of London

"A fine and long-overdue introduction to Jamaican Maroons, based on oral narratives collected in the field. . . . Learning that Maroons have valuable knowledge and insight into their own history and persuading them to reveal some of their 'intimate and hidden culture of remembrance' and to exercise their right to speak for themselves and their past, Bilby has provided an important work of reclamation and rehabilitation of Maroon identity over three centuries of history."--Monica Schuler, professor emerita, Wayne State University

"In this work [Bilby] focuses on the African voices of freedom in Jamaica, demonstrating how the Kromanti spirits of Africa worked with the living people of Moore Town and other communities to forge independent Maroon territory and territoriality in the past, bring[ing] this past constantly into the present. The key anthropological and historical issues of memory, text, play, story, and communication flow beautifully through the author's text and through the texts of the real Maroon people themselves. The author also learned to commune with the African spirits through Maroon people, and he shares these experiences with the reader so that we may vicariously commune as well. But there is no contrivance here; anthropological rigor emerges everywhere to create a convincing and nearly unique document that will serve anthropology, history, and students of vernacular speech and wide-flung cosmology for a long, long time to come. . . . An anthropologist's dream of elegance, accuracy, poignancy, and communicability to others."--Norman E. Whitten, director, Center for Latin American and Caribbean Studies, University of Illinois

"Reflects the author’s quarter of a century of intensive research into the history, storytelling, drama, music, and spirituality of Jamaican Maroons, and immediately establishes a claim as the most comprehensive text ever written about the Jamaican Maroons, making it essential reading for anyone concerned with Jamaican cultures . . . there is nothing simple in the history of the Jamaican Maroons, and Bilby deserves enormous credit for creating a book faithful to the actual voices of a community more readily exploited by the modern world than understood in their own terms . . . short of going to Jamaica and talking with Maroon leaders, if you’re able to gain their trust, this book is the best way to enter their world."--Norman Weinstein, author of "A Night in Tunisia: Imaginings of Africa in Jazz"

Constructed from the oral histories of one of the most secretive groups in the Caribbean, the Maroons of Jamaica, this book provides a unique view of a culture that has been nurtured by enslaved Africans and their descendants to survive against tremendous odds for nearly 350 years. The descendants of African slaves who escaped from the Spanish and British plantations in Jamaica during the 17th and early 18th centuries, the Maroons battled for and maintained their autonomy during 70 years of guerrilla warfare with the British army that ended in a truce in 1739. The British colonial government in Jamaica violated the truce and began a deportation campaign to eradicate the Maroons in 1795. Nearly 600 were captured and sent to Nova Scotia, where many died of exposure. Remarkably, this and later efforts to destroy the group failed, and today the Maroon settlements on Jamaica still consider themselves an independent nation governed by the terms granted in the 1739 truce.

In numerous visits to the island over 25 years, Kenneth Bilby gained the confidence of the Maroon elders, who revealed to him secret details of their ancestral heritage--including history, music, Kromanti religion, language, and culture--for publication. Whereas almost all previous studies of the Jamaican Maroons have focused on the distant past, this one is as much about present-day Maroons as about their ancestors. For the first time, the story of what it means to be a Maroon is conveyed through the words of the Maroons themselves. Gathering together dozens of oral-history narratives, sacred songs, and other forms of esoteric knowledge, the book is a study of cultural memory challenging the common assumption that contemporary Maroons have little or no knowledge of their own ancestral past, as well as the related idea that they have "all but disappeared" from Jamaica. Equally important is the story of the complex local and global politics into which the contemporary Maroons are increasingly drawn and the problematic ways in which the Maroons’ highly valued history has been appropriated, theorized, and commodified in postcolonial Jamaica and beyond, threatening to sever the Maroons from their own past.

The first study of Jamaican Maroons to place living voices at the center of analysis, True-Born Maroons sheds much new light on both the past and present situation of Jamaica's hidden Others, once described as "some of the world's most famous but least-known people."

Kenneth Bilby is a research associate at the Smithsonian Institution. He is the coauthor of Caribbean Currents: Caribbean Music from Rumba to Reggae, which received the Caribbean Studies Association's Gordon K. Lewis Award for Caribbean Scholarship in 1996.

"Bilby deserves enormous credit for creating a book faithful to the actual voices of a community more readily exploited by the modern world than understood in their own terms. . . Short of going to Jamaica and talking with Maroon leaders, if you're able to gain their trust, this book is the best way to enter their world."
--THE BEAT magazine

"Bilby successfully shows how Jamaican Maroon communities and strong Maroon identity have perdured, and that the lives of individual Maroons are still grounded in Maroon history. Recommended"
--CHOICE

"A must-have for every library and a must-read so that Jamaicans can learn the contradictions of their complex, multifaceted heritage from the lips of their fellow Jamaicans, with resonance from scholars of many nations who hold their culture in high esteem."
--Jamaica Gleaner Online

...will surely be long regarded as the definitive study of the Jamaican Marrons...
--Provisions Library--Resources for Arts and Social Change

Bibly has done both scholarship and the Maroon communities a great service to have recorded these cultural moments before they disappear.
--Jamaica Gleaner

True-Born Maroons, the fruit of twenty years of fieldwork in Jamaica, is no doubt the last word on the island's runaway slaves and their descendants. As a record of a fast-vanishing culture, Kenneth Bilby's book moreover has a moving valedictory tone."
--Times Literary Supplement

…a fully developed, impressive analysis and a valuable resource that demonstrates in an exemplary fashion that those who collect data can just as skillfully allow the informant voices to speak for themselves.
--Journal of Pidgin and Creole Languages

" The Defining work on Jamaican Maroons and has left scholars with a wealth of information to explore in the future. With this text Kenneth Bilby has established himself as the pre-eminent scholar on the subject."
--Southern Historians

" Bilby's vividly written and illustrated book makes an essential contribution to the study of the Caribbean and the African diaspora and will be a critical reading to scholars interested in religion and ritual, language and folklore, place, history, and memory."
--American Ethnologist

" This is an excellent study of the Maroons. All students of Maroon societies and of slavery in the Americas will find this an invaluable book."
--Caribbean Studies