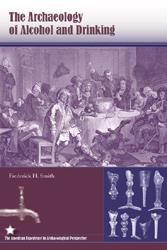 "Smith interrogates sherds and other leavings of bibulous entertainments, drunken binges, and everyday drinking in a demonstration of historical archaeology's meaningful contributions to the study of alcohol and its use and abuse in the early modern and modern world."--Mary C. Beaudry, Boston University

Through its complex history, alcohol has served many cultural functions, often constructive ones. For centuries it has been used as a valuable economic commodity, a medicinal tool, a focus of social gatherings, and a mechanism for psychological escape.

Frederick Smith identifies key themes associated with alcohol production, distribution, and consumption. He discusses industrial and home production of alcoholic beverages and both public and clandestine drinking. He defines the contexts in which drinking takes place and the motivations--social and antisocial--for alcohol consumption.

As a case study, Smith examines archaeological evidence of alcohol use from a cave site in Barbados, proposing that major historical events can be influenced by the social and spiritual use of alcohol. At the same time, Smith argues, alcohol can also provide people with a temporary respite from the challenges of daily life.

Frederick H. Smith is assistant professor of anthropology at the College of William and Mary.

"By the conclusion of this brilliant example of comparative archaelogical study, Smith has succeeded in communicating how booze is a "prism" through which readers can reexamine complicated social interactions between individuals and groups."
--CHOICE

"Archaeologists finally have the opportunity (and pretext) for uniting their two great passions: digging and drinking. A thoroughly researched well-written and wide-ranging primer on its titular subject, and I urge anyone pursuing alcohol studies in archaeology (or faced with an assemblage of broken bottles to interpret) to save themselves considerable time by placing it at the top of their list. A top-notch volume, now go pick up a copy of this book, grab a drink, and happy reading."
--The Midden