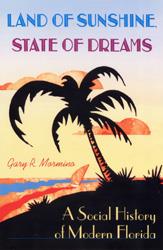 Land of Sunshine, State of Dreams
A Social History of Modern Florida

Millard Fillmore Caldwell: Governing on the Wrong Side of History
The Immigrant World of Ybor City: Italians and Their Latin Neighbors in Tampa, 1885–1985
The Architecture of Leisure: The Florida Resort Hotels of Henry Flagler and Henry Plant
Dreams in the New Century: Instant Cities, Shattered Hopes, and Florida’s Turning Point