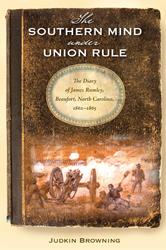 "This skillfully edited journal does an outstanding job of showing us how a zealous Confederate literally processed and reconfigured the war through his own cultural and political assumptions."--Peter S. Carmichael, author of The Last Generations: Young Virginians in Peace, War, and Reunion

"Offers a rare glimpse into the mind of an ardent Confederate sympathizer living under Union control."--Richard M. Reid, author of Freedom for Themselves

"I applaud Judkin Browning for identifying this very useful source. The Rumley diary offers a rare glimpse into the mind of an ardent Confederate sympathizer living under Union control."--Richard M. Reid, University of Guelph

James Rumley was nearly fifty years old when the Civil War reached the remote outer banks community of Beaufort, North Carolina. Comfortably employed as clerk of the Superior Court of Carteret County, he could only watch as a Union fleet commanded by General Ambrose Burnside snaked its way up the Neuse River in March 1862 and took control of the area.

In response to laws enacted by occupying forces, Rumley took the Oath of Allegiance, stood aside as his beloved courthouse was used for pro-Union rallies, and watched helplessly as friends and neighbors had their property seized and taken away. In public, Rumley appeared calm and cooperative, but behind closed doors he poured all his horror, disgust, and outrage into his diary.

Safely hidden from the view of military authority, he explained in rational terms how his pledge of allegiance to the invading forces was not morally binding and expressed his endless worry over seeing former slaves emancipated and empowered. This constantly surprising diary provides a rare window onto the mind of a Confederate sympathizer under the rule of what he considered to be an alien, unlawful, and "pestilent" power.

Judkin Browning, assistant professor of military history at Appalachian State University, is coeditor of Letters from a North Carolina Unionist.

"The Southern Mind Under Union Rule is recommended on several fronts. As an articulate account of Union occupation it is superb, and it also carefully recounts the breaking down of the old social order maintained between blacks and whites in coastal North Carolina from a Confederate point of view. The diary also provides some insight into local military operations."
--Civil War Books and Authors

"The diary offers both thought-provoking and very disturbing reading."
--The Journal of America's Military Past Volume XXXV, No. 3

"Each passage is articulate and fascinating. Judkin Browning has produced a remarkable volume that deepens our understanding of Southern resistance under the direst of circumstances. The painstaking research clearly evident in both the introduction and the sources notes is informative and unobtrusive. Thus, by being consistently mindful of the value of his source document, and of his role in its production, Browning has added a rich and necessary addition to the vast body of works on the American Civil War."
--H-Net Reviews

In this skillfully edited volume, Judkin Browning gives us valuable insight into the thoughts of one man who lived under and opposed, albeit passively, military rule. A small but important historical window into the thoughts of someone living under an occupying force. Browning's impressive editorial work - there is a substantial introduction and informative notes - has breathed new life into this neglected source.
--The Journal of Southern History