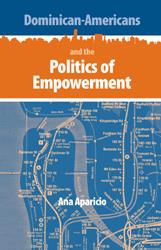 Dominican-Americans and the Politics of Empowerment

"An original and significant contribution to the growing field of Latino Studies that documents the emergence of a pan-ethnic and interracial sense of solidarity among Latinos and other ‘people of color'."--Jorge Duany, University of Puerto Rico

"Clearly written, well argued, intellectually engaging. . . . this book shows that one can only hope to understand the political development of New York Dominicans by meticulous observation of a convergence of multiple factors. . . . An unprecedented chronicle of the evolution of Dominicans as political beings in New York."--Silvio Torres-Saillant, Syracuse University

Aparicio examines the ways first- and second-generation Dominican-Americans in the dynamic northern Manhattan neighborhood of Washington Heights have shaped a new Dominican presence in local New York City politics. Through community organizing, they have formed coalitions with people of different national and ethnic backgrounds and other people of color, tackled local concerns, and created new routes for empowerment.

The character of Dominican-American politics has changed since the first large wave of Dominican immigrants arrived in New York in the 1960s. Aparicio shows how second-generation activists, raised and educated in public institutions in the city, have expanded their network to include fellow Dominicans—both in the United States and abroad--as well as other ethnic and racial minorities, such as Puerto Ricans and African-Americans, who share common goals. Offering the perspectives of local organizers and members of Dominican-American organizations, Aparicio documents their thoughts on such issues as education, police brutality, civic participation, and politics. She also explores the ways in which they experience, reflect upon, and organize around issues of race and racialization processes, and how their experiences influence their political agendas and actions.

This new story of immigration and empowerment highlights the complexity of any group’s political development, making it useful for students of U.S. Latino and youth culture, as well as scholars of urban studies and politics, race, immigration, and transnationalism.
Ana Aparicio is assistant professor of anthropology and research associate for the Mauricio Gaston Institute for Latino Community Development and Public Policy at the University of Massachusetts, Boston.