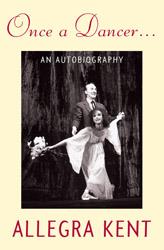 Once A Dancer…:
An Autobiography

Autobiography of one of Balanchine's finest ballerinas

"A daffy and unexpectedly poignant autobiography. . . . [Kent] repossesses as a writer the unpredictable charm of her dancing. She is zanily elegant . . . frequently stranded, broke, desperate, abused, or abandoned, yet well served by a fey kind of gumption."--Kirkus Reviews

"In [Balanchine's] garden of unearthly delights, Allegra Kent as the most enchanting bloom of all. . . . Through Kent's own wise and courageous recollections . . . we see her unique spirit and almost see again her glorious dancing."--Vanity Fair

"[Kent's] writing is as varied, lucid, and troubling as her dancing. . . . To ask whether she knows how much she has inadvertently told us is merely to frame one more time the terms of her peculiar mystery."--Wall Street Journal

"As distinctly riveting as she ever was on stage."--Dance Magazine

"Kent, one feels, has never known quite where or who she is. . . . Born Iris Cohen in 1937, she had an early life that was the crazy kind you might find in the fiction of Flannery O'Connor. . . . [She writes,] '[Mr. B.] saw in me the psychological raw materials that could be molded and remolded into images of sensuality--unrealized and restrained, but there, just under the surface. The star inside the sapphire.' This is not only a convincing analysis of a difficult concept, it is beautiful writing."--Washington Post

Allegra Kent joined the New York City Ballet at age 15 and within two years had become one of Balanchine's favorite dancers, inspiring numerous works including The Unanswered Question. By turns beautiful, sensuous, and mysterious on stage, her life was as dramatic as her dancing style: marrying at age twenty and having three children in the middle of her career; battling an overbearing mother, depression, and financial troubles; and experiencing health problems. Fired from the company on the day Balanchine died, she remains one of the most influential and inspiring principal dancers from the early years of the New York City Ballet. She lives in New York City.