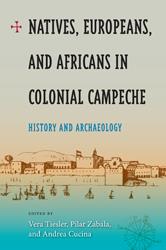 Natives, Europeans, and Africans in Colonial Campeche
History and Archaeology

"This multi-disciplinary study is as ambitious as it is timely. The close collaboration of respected ethnohistorians, archaeologists, and physical anthropologists from Mexico and the U.S. is enthusiastically applauded."--Joel W. Palka, University of Illinois, Chicago

The town of San Francisco de Campeche was founded in 1540 and during the first two centuries of the colonies served as one of the key Mexican ports of the Spanish Empire. The contributors to this volume have combed through archival written documents, architectural plans, maps, ceramic artifacts, and bioarchaeological data from human remains recovered at the original Catholic cemetery to reconstruct a dramatic story of colonial life and death.

The documents reveal the religious and political strategies used by the Spanish Crown to implant European society; the skeletal evidence traces the human side of the story: physical hardship, the ravages of disease, body modifications (especially of teeth) to denote status, and forced assimilation of both natives and Africans. These nuanced discussions and insights reveal much about the complex, multiracial tapestry of the early Colonial period in Mexico.