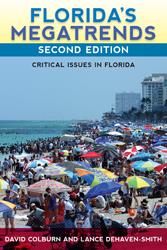 "This brief but powerful book analyzes Florida since the 1870s.  . . . Here each historical event is included for a reason, and each forecast for the future is based on solid historical precedents. The result is an exciting and informative book."--Florida Historical Quarterly

"Offers an important perspective on some of the most critical issues facing our great state in the twenty-first century."--U.S. Senator Bob Graham

In the first edition of Florida Megatrends, David Colburn and Lance deHaven-Smith revealed the state for what it is: a bellwether for the nation. The intervening years have only confirmed their analyses, as Florida and the U.S. have been battered and transformed by the housing collapse, the great economic recession that began in 2008, record-high gas prices, withering tourism, the 2004 hurricane season, and much more. This completely revised and updated edition brings the story up-to-date.

Philosophical Critiques of Policy Analysis: Lindblom, Habermas, and the Great Society
Government in the Sunshine State: Florida Since Statehood