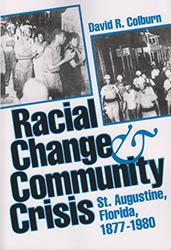 "Colburn presents the facts and is not afraid to interpret them. His narrative captures the inherent drama of specific events and situations: the ruthless beatings of demonstrators, the complacency and fear of many white moderates, the genuinely incredible power of nonviolence to accomplish grand political ends, and the great courage this weapon required of those who wielded it."
--Reviews in American History

In 1964, racial reform and racial extremism clashed in St. Augustine, Florida, the city the Southern Christian Leadership Conference targeted for the activities of its nonviolent army. Under the leadership of Martin Luther King, Jr., the SCLC staged demonstrations in St. Augustine that they hoped would pressure the U.S. Congress into passing civil rights legislation. Extremists, led by Ku Klux Klan and John Birch Society members, saw in St. Augustine a last opportunity to halt the forces of racial change. What resulted--beatings, shootings, bombings, and mass arrests--was some of the ugliest racial violence the nation has witnessed.