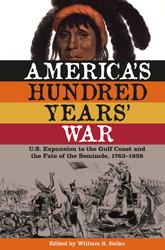 America's Hundred Years' War
U.S. Expansion to the Gulf Coast and the Fate of the Seminole, 1763–1858

"These essays explore the context and meaning of the three Seminole Wars in a way that illustrates how the conflicts intersected the mainstream of American history. America's longest wars truly impacted the country's national development."--Gene Allen Smith, coeditor of Nexus of Empire: Negotiating Loyalty and Identity in the Revolutionary Borderlands, 1760s-1820s

"This book makes several important contributions to the history and ethnohistory of the Seminole Wars. This may be the first time a book has placed the wars with the Seminoles in such detailed American political context."--Gregory A. Waselkov, author of A Conquering Spirit: Fort Mims and the Redstick War of 1813-1814

Conventional history narratives tell us that in the early years of the Republic, the United States fought three wars against the Seminole Indians and two against the Creeks. However, William Belko and the contributors to America's Hundred Years' War argue that we would do better to view these events as moments of heightened military aggression punctuating a much longer period of conflict in the Gulf Coast region.

Featuring essays on topics ranging from international diplomacy to Seminole military strategy, the volume urges us to reconsider the reasons for and impact of early U.S. territorial expansion. It highlights the actions and motivations of Indians and African Americans during the period and establishes the groundwork for research that is more balanced and looks beyond the hopes and dreams of whites.

America's Hundred Years' War offers more than a chronicle of the politics and economics of international rivalry. It provides a narrative of humanity and inhumanity, arrogance and misunderstanding, and outright bloodshed between vanquisher and vanquished as well.

William S. Belko is executive director of the Missouri Humanities Council and author of The Triumph of the Antebellum Free Trade Movement.

“Provides scholars and avocational historians with useful, important insights into US expansion in the South, an area often overshadowed by the settlement of the West.”
--Chronicles of Oklahoma

"A valuable contribution to the literature and certainly achieves its objective of highlighting America's Hundred Years' War."
--Journal of Southern History

"Assessing the years from 1763 to just years prior to the American Civil War, contributors inquire and evaluate the impact of U.S. designs on Florida and the disaster that ultimately befell the Seminole Indians. Belko and the contributors effectively incorporate rarely considered events into a broader picture and interject the contests into the broader concerns of antebellum America. This volume is necessary reading for any scholar of southeastern Native Americans, those interested in Florida history, and an excellent case study of the complex consequences of American expansion and Manifest Destiny."
--Southern Historian

“An interesting analysis of a generally overlooked period of America’s past.”
--Book News Inc.

“Largely historical in scope and approach and is successful in placing this relatively small-scale history on the national and international stage. The scholarship of Florida history desperately needs this approach, and William Belko’s book serves this cause very well.”
--Florida Historical Quarterly

A compelling argument for a re-examination of the Gulf region’s complex history. America’s Hundred Years’ War does an excellent job of pointing out the myriad of political, racial, and cultural influences that shaped the era’s development in the late eighteenth and early nineteenth century.
--War in History

If you haven’t yet added America’s Hundred Years’ War to your library, check it out. As many of the writers in this fine volume show us, there is much more to the Seminole Wars than we have come to expect.
--Seminal Wars Foundation Report

If one wants a sense of the factors involved in the role of the Gulf Coast in manifest destiny and American expansion, the book can be quite suggestive.
--American Indian Culture and Research Journal

America’s Hundred Years’ War is a collection of nine good essays that will be of interest to historians of the borderlands, American expansion, Native Americans, and the Gulf Coast and Southeast during the early republic and antebellum periods.
--Journal of the Early Republic