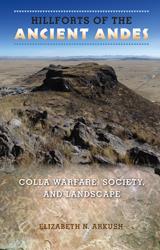 Hillforts of the Ancient Andes
Colla Warfare, Society, and Landscape

"Using a bold combination of surface survey, excavation, and cutting-edge GIS modeling, Arkush examines the social conditions that existed in the Andes during this period of unprecedented regional conflict and provides critical insights into the culture of war which existed at this time."--Brian S. Bauer, University of Illinois, Chicago

"Arkush's architectural analysis and study of artifacts is accompanied by a new body of radiocarbon dates that turn traditional documentary interpretations of Colla social organization on their heads. This is an important advance in our understanding of late prehispanic societies in the Andean highlands."--R. Alan Covey, Southern Methodist University

By AD 1000, the Colla controlled the high-altitude plains near Lake Titicaca in southern Peru. They fought over the region for many centuries before becoming a subject people of the Inca (who described them as the most formidible foes they faced) circa 1450, and then of the Spanish in the sixteenth century.

Like any people at war, the Colla were not engaged in active conflict all of the time. But frequent warfare (perhaps over limited natural resources), along with drought and environmental changes, powerfully influenced the society's settlement choices and physical defenses, as well as their interaction with the landscape.

By focusing on the pre-Inca society in this key region of the Andes, Elizabeth Arkush demonstrates how a thorough archaeological investigation of these hillfort towns reveals new ways to study the sociopolitical organization of pre-Columbian societies.

Elizabeth N. Arkush is associate professor of anthropology at the University of Virginia.

"A work that is meticulously researched, analytically incisive, and so clearly written that it is a pleasure to read. Its particular worth, though, lies in the two issues it targets, warfare and political evolution. Each is of considerable interest to contemporary archaeology and of self-evident importance to our understanding of the human predicament, but it is their unusual conjuction at this point and period that makes this work especially significant."
--H-Net Reviews

The Archaeology of Warfare: Prehistories of Raiding and Conquest