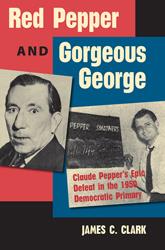 
"A fascinating study of two important Floridians at a critical juncture in American history, when anticommunism made a decisive mark on postwar politics and culture. Clark effectively untangles the divergent strands in the complicated story of the Florida senatorial election of 1950, and he does so judiciously and fairly. Crisply written, engagingly presented, and carefully researched, this is essential reading for students of modern America."--William Link, author of Righteous Warrior: Jesse Helms and the Rise of Modern Conservatism

"In this important and insightful work, Clark does much to separate myth from reality in the pivotal 1950 Florida Senate race that shaped state and national politics for decades to come. Red Pepper and Gorgeous George captures the drama, controversy, and chicanery of one of America’s most memorable elections. A must read for anyone interested in Florida and southern history."--Keith M. Finley, Southeastern Louisiana University

For nearly a century in Florida and throughout the South, election to the United States Senate virtually guaranteed a lifetime position, especially if you were a Democrat. Certainly no Republican candidate stood a chance in the general election, and it was nearly unthinkable to imagine a serious challenger emerging in the primary.

Claude "Red" Pepper first ran for the U.S. Senate in 1934. Though unsuccessful, despite allegations of voter fraud, he won a special election two years later after both senators from Florida died in office. Reelected to full terms in 1938 and 1944 as a vigorous supporter of the New Deal, he had every reason to suspect the seat was his indefinitely--or at least until he decided it was time to seek higher office.

Pepper saw himself as the national heir to Roosevelt's foreign policy; he encouraged cooperation with the Soviet Union, our World War II ally, and actively worked to defeat Truman’s presidential nomination in 1948. After nearly fourteen years in office, Pepper had earned the enmity of the president, alienated most of his colleagues in the senate, and aligned himself with the ultra-left-wing politics of Henry Wallace. Still, in the entire history of the state, no sitting Florida Senator had ever been voted out of office. However, the political world was changing, and it was the right-leaning "Gorgeous" George Smathers, not Pepper, who recognized and took advantage of this fact.

Smathers fought a vicious, bare-knuckled campaign, employing ferocious and divisive attacks against Pepper. He helped make "liberal" anathema to aspiring southern politics, and was the first of a new breed of conservative politicians--though not yet Republican--to rise to power. Eventually the era would be named for a junior senator from Wisconsin, but it was Smathers who first successfully employed the strategies of McCarthyism to unseat an incumbent.

He was so successful, in fact, that before the general election Smathers had to reassure President Truman and other potential supporters that his loyalties did, in fact, lie with the Democractic Party. His resounding victory inspired others--including Richard Nixon and Barry Goldwater--to adopt similar tactics in their senatorial campaigns. It also helped set the stage for the complete reversal of the political power structure that had ruled the South since the end of Reconstruction.

Red Pepper and Gorgeous George is a fascinating look at the campaign that changed everything in Florida--and the South. It is also a shocking, sobering reminder that, despite introducing the phrase "hanging chad" to the national lexicon, the 2000 presidential election was merely the second most important national election to take place in the state.

James C. Clark is a journalist, magazine editor, and a member of the history faculty at the University of Central Florida. He is the author of four books, including Faded Glory: Presidents Out of Power.

"Clark employs crisp, clear prose and an ability to tie together many historical strands in order to construct his engaging nonfiction narrative. An important piece of reading for those fascinated by not only Florida politics but national political history as well."
--The Florida Book Review

"Successful in providing both the casual reader and political scholar with a valuable tool which helps to shed light on a pivotal campaign in both the history of the state and nation."
--Florida Historical Quarterly

"Clark's research separates legend from fact and puts the race in the larger context of a changing, growing postwar Florida."
--Orlando Sentinel

“Clark has written a savvy, persuasive book. His command of Florida politics is expert, and he has an eye for the ironies of American politics.”
--International Social Science Review