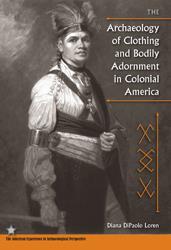 The Archaeology of Clothing and Bodily Adornment in Colonial America

"Highly readable but also innovative in its approach to a broad array of material from diverse colonial contexts."--Carolyn White, University of Nevada, Reno

"Loren brings together a sampling of the extensive literature on the archaeology of clothing and adornment to argue that artifacts of the body acquire their meaning through cultural practice. She shows how dress serves as social discourse and a tool of identity negotiation."--Kathleen Deagan, Florida Museum of Natural History

Dress has always been a social medium. Color, fabric, and fit of clothing, along with adornments, posture, and manners, convey information on personal status, occupation, religious beliefs, and even sexual preferences. Clothing and adornment are therefore important not only for their utility but also in their expressive properties and the ability of the wearer to manipulate those properties.

Diana DiPaolo Loren investigates some ways in which colonial peoples chose to express their bodies and identities through clothing and adornment. She examines strategies of combining local-made and imported goods not simply to emulate European elites, but instead to create a language of new appearance by which to communicate in an often contentious colonial world.

Through the lens of historical archaeology Loren highlights the active manipulation of the material culture of clothing and adornment by people in English, Dutch, French, and Spanish colonies, demonstrating that within Northern American dressing traditions, clothing and identity are inextricably linked.

"Fills a gap in the literature of material culture, particularly that which deals with North American colonists and tribes. This book is recommended to researchers, museum curators, and students."
--Colonial Latin American Historical Review

"Examines the ways in which adornment is meaningful in colonial North America, especially in forming and presenting a sense of the self. … A useful reference and point of departure for professionals in a range of disciplines who deal with objects of adornment."
--Winterthur Portfolio