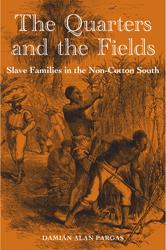 "A fresh and inventive method of presenting some lesser-known aspects of slavery to both scholars and students."--Ronald Traylor, Southeastern Louisiana University

"Pargas redefines the meaning of 'slave agency' to examine the varying ability of enslaved workers to shape and protect their domestic arrangements."--Larry Hudson, University of Rochester

The Quarters and the Fields offers a unique approach to the examination of slavery. Rather than focusing on slave work and family life on cotton plantations, Damian Pargas compares the practice of slavery among the other major agricultural cultures in the nineteenth-century South: tobacco, mixed grain, rice, and sugar cane. He reveals how the demands of different types of masters and crops influenced work patterns and habits, which in turn shaped slaves' family life.
By presenting a broader view of the complex forces that shaped enslaved people's family lives, not only from outside but also from within, this book takes an inclusive approach to the slave agency debate. A comparative study that examines the importance of time and place for slave families, The Quarters and the Fields provides a means for understanding them as they truly were: dynamic social units that were formed and existed under different circumstances across time and space.


Damian Alan Pargas is assistant professor of history and American studies at Utrecht University in the Netherlands.

Critically employing many well-known studies alongside primary sources emphasizing his focus regions, Pargas offers a fresh interpretation for considering slave family life and the implications of regional agriculture in the slave system.
--CHOICE

This masterful study attempts to answer two important questions about slave families, both the subjects of considerable controversy. First, what was the relative power of masters against the desires of slaves? Second, though antebellum specialists have minimized geographic differences among families, which aspects of family life were typical? To answer these questions, Pargas examines three quite different areas in his detailed and engrossing work: Fairfax County in Virginia; the Georgetown District of low-country South Carolina; and St. James Parish, midway between New Orleans and Baton Rouge. It calls into question many of the generalizations about slavery in recent generations and poses a serious challenge for scholars of the particular institution.
--Virginia Magazine of History and Biography

"Firmly demonstrates the need to rethink slavery on a region-by-region basis."
--H-Net Reviews

"This well-researched and readable study adds subtle texture to the historiography of slave families and slave agency through its comparative regional focus and attention to multiple themes. Pargas has certainly not written the last word on either topic, but this work should inspire other historians to conduct more comparative studies of slavery outside the black belt."
--The Journal of Southern History

"The comparative approach and the synthesis of a number of important regional studies is very useful in emphasizing the value of examining the contexts within which slave families existed and operated."
--Florida Historical Quarterly

"Marks a path toward a new, more nuanced, understanding of the slave family, one that takes into account important regional variations in the old south…an insightful book that intervenes forcefully and productively in the historiography."
--Labor

“An in-depth evaluation of enslaved family life across time and space… demonstrates how the interplay of the environment and the working conditions influenced enslaved families, by examining their varied responses and diverse strategies of resistance.”
--Journal of African American History