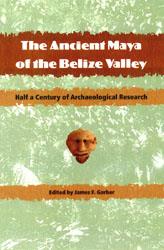 The Ancient Maya of the Belize Valley:
Half a Century of Archaeological Research

"An admirable contribution to the growing literature on Maya settlement research initiated by Gordon Willey in the Belize Valley in the 1950s."--Shirley B. Mock, University of Texas, San Antonio

Over half a century ago, the late Gordon Willey began his research in the Belize Valley, and ten years later he published a synthesis of his data that is recognized today as a classic study of ancient Maya settlement patterns. This new volume looks at the abundant research that has taken place in the region since the 1950s (and includes a new retrospective chapter from Willey that was submitted shortly before his death in April, 2002). The Ancient Maya of the Belize Valley represents an attempt to present in one volume the extensive data from the diverse sites in this part of Mesoamerica, one of the richest archaeological areas in the Maya world. The collection provides a key to understanding the valley's ancient political and social organization by highlighting the interconnectedness of the region's settlements.

1. The Archaeology of the Belize Valley in Historical Perspective, by Arlen F. Chase and James F. Garber

5. Major Center Identifiers at a Plazuela Group Near the Ancient Maya Site of Baking Pot, by James M. Conlon and Terry G. Powis

8. The Role of "Terminus Groups" in Lowland Maya Site Planning: An Example from Cahal Pech, by David Cheetham

10. Xunantunich in a Belize Valley Context, by Richard M. Leventhal and Wendy Ashmore

11. The Royal Charter at Xunantunich, by Virginia M. Fields

15. Integration among Communities, Centers, and Regions: The Case from El Pilar, by Anabel Ford

Part 4. The Belize Valley: Intergration
17. Problems in the Definition and Interpretation of "Minor Centers" in Maya Archaeology with Reference to the Upper Belize River Valley, by Gyles Iannone

18. The Emergence of Minor Centers in the Zones between Seats of Power, by W. David Driver and James F. Garber

19. The Terminal Classic to Postclassic Transition in the Belize River Valley, by James Aimers

20. Polities, Politics, and Social Dynamics: "Contextualizing" the Archaeology of the Belize Valley and Caracol, by Arlen F. Chase

21. Diverse Voices: Toward an Understanding of Belize Valley Archaeology, by Diane Z. Chase

James F. Garber is professor of anthropology and field school director at Southwest Texas State University. He is the author of Archaeology at Cerros Belize, Central America, volume 2, The Artifacts.

"As Maya scholars raise increasingly clearer and better informed questions about the development of Maya civilization over two and a half millennia, the very rich data that this highly recommended volume discusses are certain to play a crucial role in providing new answers and even more clarified questions."
--Journal of Anthropological Research

"An outstanding body of evidence from Belize Valley that contributes to understanding the organization and dynamics of Maya society in general, and provides a stimulating basis for further research. Strongly recommended."
--Choice

"Ambitious and comprehensive...This well-organized volume will be a boon to students and professional archaeologists."
--Journal of Field Archaeology