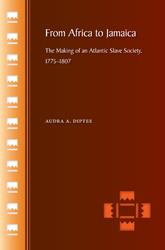 From Africa to Jamaica
The Making of an Atlantic Slave Society, 1775–1807

"Many Jamaicans are seeking empirical data from the period of the trade in Africans to justify the case for reparation. This book should provide them with much of what they need to understand this crime against humanity."--Verene A. Shepherd, University of the West Indies, Mona Campus, Jamaica

"This book makes a very significant contribution to the literature on the Atlantic Slave Trade and on its impact in Jamaica. It is a highly original study and addresses the important issue of the demography of the enslaved as well as emphasizing their humanity."--Gad Heuman, University of Warwick

Rich with historical sketches of the life and experiences of slaves in Africa, on slave ships, and in Jamaica, this volume illustrates the way enslaved Africans lived and helped to shape Jamaican society in the three decades before British abolition of the slave trade.

Audra Diptee's in-depth investigations reveal unexpected insights into the demographics of those captured in Africa and legally transported on British slave ships. For example, there is a commonly held belief that slave traders had a preference for adult males. In fact, the practicalities of slave raiding meant that women, children, and large groups of the elderly were particularly vulnerable during raids and were more often captured and made available for sale in the Caribbean.

From Africa to Jamaica offers a new look at the Atlantic slave trade in its final years, fleshing out the historical portrait of the African men, women, and children who were sold in Jamaica and were thus among the last of the enslaved to put their stamp on Jamaican society. There is no comparable study that takes such a comprehensive approach, looking at both the African and Jamaican sides of the trade system.

Audra A. Diptee, associate professor of history at Carleton University, is the coeditor of Children in Colonial Africa and Beyond Fragmentation: Perspectives in Caribbean History.

"One of the greatest strengths of Diptee's account is the effort she makes to reveal the particular experiences and perspectives of women, and especially children. She thus makes a significant contribution to the recent scholarly effort to illuminate the full range of experiences of the enslaved. Diptee's worthy account does much to expand our understanding of the trade that connected West African and Jamaica in the late eighteenth century and the people whose lives were forcibly transformed by it."
--International Journal of Maritime History

"Offers a new demographic assessment of the slave trade and participates in continued debates within the historiography while attempting to understanding the perspectives of the enslaved men, women, and children themselves. To counter the limits of quantitative analysis, Diptee mines sources such as slave narratives, travelogues by traders, and planters' papers for a sense of the enslavement experience. She follows the trajectory of the enslaved from their point of capture, often far from the coast, and eventual shipment from various ports to their new lives in Jamaica. By examining captives' experiences from both sides of the Atlantic, Diptee illuminates the varied dynamics that brought men, women, and children into the transatlantic slave trade and ultimately created a slave society in Jamaica. Her discussion of children's experiences in the trade is especially welcome, as youths remain an understudied group. While understanding fully the 'lives lived and lives lost' in the transatlantic slave trade may not be possible, Diptee's focused and comprehensive view of the final years of trade to Jamaica brings us one step closer."
--Southern Historian, XXXIII

"Makes daring claims about longstanding historiographical debates with some intriguing contentions." … "With the kinds of detailed statistical information about the nature of the slave trade provided by this book . . . , scholars should begin to be able to make significant comparisons about the nature of slave societies throughout the Americas."
--CHOICE