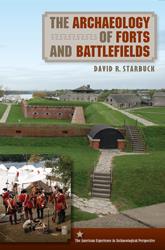 The Archaeology of Forts and Battlefields

"A great survey of the state of military-sites archaeology in America."--Lynn L. M. Evans, curator of archaeology for Mackinac State Historic Parks

Forts and battlefields embody activities and locations where nations have come into conflict and where victory or defeat has determined the shape of modern American society. This book discusses some of the most dynamic archaeological projects that have been conducted at many of the most exciting forts and battlefields throughout the United States.

David Starbuck discusses the history of American military conflicts and the techniques used for locating and documenting forts and battlefields. He addresses how archaeologists use modern scientific techniques to discover the remains of forts, battlefields, and other types of military encampments, as well as some of the problems encountered when dealing with human remains found at military sites.

Referencing both terrestrial and underwater examples, Starbuck uses case studies from major North American military conflicts to explain how forensic anthropology has helped greatly in assigning "identity" to some of the forgotten soldiers and how archaeology has helped to protect sites and improve the accuracy of the reconstruction of forts and battlefields.

Having directed excavations at several major military sites, and having visited many of the sites detailed in his book, Starbuck is able to provide a personal perspective on what survives of these forts and battlefields today and what they tell us about our past.

David R. Starbuck, associate professor of anthropology and sociology at Plymouth State University, is the author of eight books including Massacre at Fort William Henry and Rangers and Redcoats on the Hudson.

"A seminal contribution to the growing body of archaeological literature."
--The Midwest Book Review

"This handbook is for people interested in locating, documenting, and scientifically excavating forts and battlefields, including underwater sites. Case studies illustrate how archaeologists use the latest technology to locate and study the military history of the site, including the lives, with all their hardships, of the men and women involved."
--American Archaeology

"A highly readable archaeological survey of American war sites, describing ways archaeologists use scientific techniques to understand the lives that were lived and lost during war."
--Plymouth Magazine