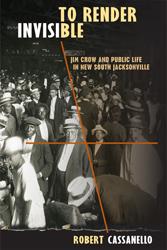 
“Reinforc[es] the point that black political activity did not simply stop with the end of Reconstruction, but continued in response to the changing nature of Jim Crow.”—Reviews in American History

"Covering a compelling local history, deeply imbricated with state and national events, To Render Invisible brings together dramatic stories of continuity and change, of gender and race, and of respectability and resistance in a brisk narrative lucidly informed by social theory."--David Roediger, author of The Wages of Whiteness

"Well written, clearly and logically organized, and built upon a foundation of deep research in primary sources, including newspapers, Freemen’s bureau records, official documents and personal papers."--Louis Kyriakoudes, author of The Social Origins of the Urban South

What defines a city’s public space? Who designates such areas, who determines their uses, and who gets to use them? Today’s "Occupy" movement has brought widespread attention to these issues, but Robert Cassanello demonstrates that such questions have been part of urban life for more than a century.

Rough-and-tumble nineteenth-century Jacksonville serves as a springboard to his exploration of social transformation in Florida and the South. When free black men in the city first began to vote, conservative lawmakers pushed blacks from white public spaces in order to make blacks voiceless--invisible--in the public square and thus making the public sphere a white domain. The response was a black counterpublic that at times flourished clandestinely and at other times challenged racism in the public sphere.

Fortified by the theories of Henri Lefebvre, David Harvey, and Jürgen Habermas, this is the first book to focus on the tumultuous emergence of the African American working class in Jacksonville between Reconstruction and the 1920s. Cassanello brings to light many of the reasons Jacksonville, like Birmingham, Alabama, and other cities throughout the South, continues to struggle with its contentious racial past.

Robert Cassanello is assistant professor of history at the University of Central Florida. He is coeditor of Florida's Working-Class Past: Current Perspectives on Labor, Race, and Gender from Spanish Florida to the New Immigration.

A timely reminder that blacks in the South were by no means passive bystanders during Reconstruction.
--Florida Courier

Help[s] further our understanding of the post Civil War but pre-Civil Rights era in the South.
--New Books in African American Studies

Offers a valuable look at the shift from postwar access to Jim Crow exclusion in public life in a fairly typical southern city. It reveals how segregation was not the immediate result of slavery, nor an inevitable outcome.
--H-Net Reviews

Deftly chronicles the dance between the fluid circumstances of power and the endlessly re-ordered public spaces through which Jacksonville’s black population sought to exercise self-defense, control its labor, and exert political influence.
--Blood and Oranges blog

A valuable, competently researched study of an important and oft-neglected southern community at a key time in its development . . . Cassanello’s work deserves to be read by all students of the urban New South, the Jim Crow era, and the history of Florida.
--Journal of American History

Cassanello creatively combines an analysis of the public sphere with an exploration of the Jim Crow South in this first book-length exploration of African Americans in Jacksonville, Florida, from the Civil War to the 1920s.
--Journal of Southern History

Cassanello reinforces the fact that we cannot accurately understand Florida history without a fuller understanding of its black population. As with all significant books, this one both satisfies and opens up more questions.
--H-Net Reviews

An important contribution to our understanding of the development of legal segregation and the black public sphere.
--Journal of African American History

Cassanello interestingly applies theories of urban public space from scholars like Jürgen Habermas to Jacksonville and offers a new interpretation of its New South racial experience.
--The Historian

Reinforc[es] the point that black political activity did not simply stop with the end of Reconstruction, but continued in response to the changing nature of Jim Crow.
--Reviews in American History

Florida's Working-Class Past: Current Perspectives on Labor, Race, and Gender from Spanish Florida to the New Immigration
Migration and the Transformation of the Southern Workplace since 1945