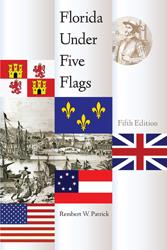 Foreword to the Quincentennial Edition by J. Michael Francis

"As virtually the first scholar to penetrate the history of Florida, Patrick’s works will remain for many years the foundation for all further efforts." --Florida Historical Quarterly

"Hard to beat. . . . Professor Patrick has bound up a lot of history into a very tidy and readable package."--Saturday Review

"Undertakes something new in presenting in one volume four hundred years of the history of this state."--Journal of Negro History

First published in 1945, this concise history of Florida commemorated the state's centennial anniversary and was the very first book issued by what was then called the University of Florida Press. Reissued numerous times, its status as a seminal text in our state's history has never been questioned. Even today, copies are difficult to find. As part of the state-wide celebration of the five hundredth anniversary of the discovery of "La Florida," we are pleased to reissue this facsimile edition of one of the most cherished books ever published by the University Press of Florida.
In this highly readable account, Rembert Patrick, the first of many giants among Florida historians, summarizes Florida's history under the flags of Spain, France, Great Britain, the Confederacy, and the United States. Distilling five centuries of history, Patrick chronicles Florida's evolving identity: from discovery and settlement to its role under the changing fortunes of European powers, from establishment as a territory to an antebellum state, from the Civil War and Reconstruction to an urban, post-World War II economic juggernaut.

Rembert W. Patrick (1909-1967) was professor of history at the University of Florida and a prolific contributor to southern historiography. The Florida Historical Society has recognized his distinguished career by naming an annual award in his honor.

"A page-turner history, thoroughly accessible to readers of all backgrounds...highly recommended."
--The Midwest Book Review