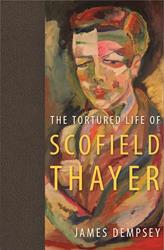 The Tortured Life of Scofield Thayer

"For nearly a century, Scofield Thayer has remained a somewhat shadowy figure in the history of modernism. But James Dempsey has at last illuminated Thayer’s passionate, intense, and agonizing story."--Barry Ahearn, editor of The Correspondence of William Carlos Williams and Louis Zukofsky

"As no other book has done before, The Tortured Life of Scofield Thayer places Thayer’s contribution to modernism as editor of The Dial in the context of his personal struggles to forge a new aesthetic and to understand his own psychology and the life of his times."--Michael Webster, author of Reading Visual Poetry after Futurism


Regarded as a titanic artistic and aesthetic achievement, the influential literary magazine The Dial published most of the great modernist writers, artists, and critics of its day. As publisher and editor of The Dial from 1920 to 1926, Scofield Thayer was gatekeeper and guide for the movement. His editorial curation introduced the ideas of literary modernism to America and gave American artists a new audience in Europe.

In The Tortured Life of Scofield Thayer, James Dempsey looks beyond the public figure best known for publishing the work of William Butler Yeats, T. S. Eliot, William Carlos Williams, E.E. Cummings, and Marianne Moore to reveal a paradoxical man fraught with indecisions and insatiable appetites, and deeply conflicted about the artistic movement to which he was benefactor and patron. Thayer suffered from schizophrenia and faded from public life upon his resignation from The Dial. His struggle with mental illness and his controversial personal life led his guardians to prohibit anything of a personal nature from appearing in previous biographies. The story of Thayer’s unmoored and peripatetic life, which in many ways mirrored the cosmopolitan rootlessness of modernism, has never been fully told until now.

James Dempsey, instructor at the Worcester Polytechnic Institute, is the author of The Court Poetry of Chaucer, Zakary’s Zombies, and Murphy’s American Dream.

“Scofield Thayer, in many ways, was a real-life version of Jay Gatsby”
--Worcester Telegram

“[A] sympathetic and pleasing study of this often overlooked patron and critic… the first detailed account of Thayer’s life and of his important but conflicted support of modern writers and artists at the Dial… enthralling and convincing.”
--Wall Street Journal

“An impressive new biography… It deals capably with a tremendously convoluted subject… This book required exhaustive research and yet is recounted in a lucid style.”
--Worcester Telegram and Gazetter

A persuasive case for placing Thayer at the centre of modernism.
--London Review of Books

Beautifully written. . . . Here is a man always suffering from a lack of self-knowledge and eventually from psychotic mental illness. Dempsey has done an excellent job of handling Thayer’s unreliable perspective.
--Journal of the E.E. Cummings Society