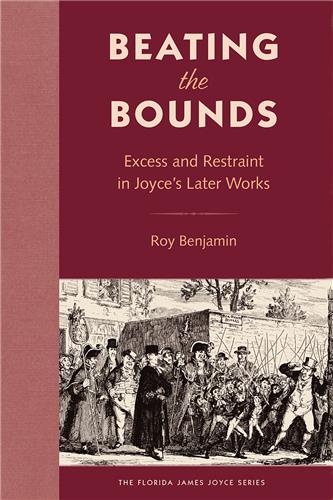 Beating the Bounds
Excess and Restraint in Joyce’s Later Works

“Allows us to rediscover why Finnegans Wake is still a vital book today: it is as bold in its exploration of universal culture as it is playful in its synthetic language, qualities that shine in the inspired pages. Linguistic excess and conceptual delimitation struggle less against one another than shape a beautiful chiasmus, the adequate equivalent of our expanding cosmos.”—Jean-Michel Rabaté, author of The Ghosts of Modernity

“This deeply learned book plunges us into the heart of Joyce’s most complex works to reveal a generative tension between boundary and excess, rule and rebellion, constraint and freedom. At once annotation and argument, this book belongs on the shelf of any serious Joyce scholar.”—Sean Latham, editor of The Cambridge Companion to Ulysses

Benjamin begins by contrasting Joyce’s exploration of the artificial impositions of ritual and political power with the writer’s attention to natural boundaries of rivers and mountains. The next section considers sexual, spiritual, and interpersonal boundaries in the Wake. Benjamin then discusses how Joyce simultaneously affirms and undermines the limits of philosophy, geometry, and aesthetics. The final section covers Joyce’s representation of the boundaries imposed in cosmogonic myths, the collision between the bounded medieval world and the boundless world of modern science, and the drive to escape from the boundaries of place.

In this detailed and original analysis, Benjamin demonstrates that in Joyce’s writing, the tendency to disintegrate into chaos is countered by an urge to impose order. Benjamin’s close readings put an abundance of subjects in conversation through the concept of limits, showing the Wake’s relevance to many different fields of thought.

Roy Benjamin is associate professor of English at Borough of Manhattan Community College.