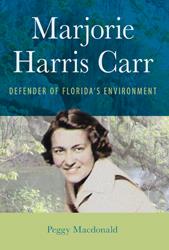 "An intimate look at a complex and brilliant woman who had to battle against stereotypes and, in so doing, invented a new form of scientifically based environmentalism. This is a must-read for anyone who truly cares about the ‘real Florida.’"--Lee Irby, author of 7,000 Clams

"Through a meticulous and beautifully illustrated study of Carr’s childhood, education, career ambitions, marriage, and family life, Macdonald shows how Carr overcame numerous obstacles to emerge as one of the leading environmental activists in Florida."--Frederick Rowe Davis, author of The Man Who Saved Sea Turtles

"Carr’s unprecedented four-decade campaign stands today as a model for all future environmental movements. This is an enthralling account of one woman’s tireless efforts to prevent ecological disaster."--Kathleen Kaska, author of The Man Who Saved the Whooping Crane

Marjorie Harris Carr (1915-1997) is best known for leading the fight against the U.S. Army Corps of Engineers’ Cross Florida Barge Canal. In this first full-length biography, Peggy Macdonald corrects many long-held misapprehensions about the self-described "housewife from Micanopy," who in reality struggled to balance career and family with her husband, Archie Carr, a pioneering conservation biologist.

Born in Boston, Carr grew up in southwest Florida, exploring marshes and waterways and observing firsthand the impact of unchecked development on the state’s flora and fauna. Macdonald’s work depicts a determined woman and Phi Beta Kappa scholar who earned undergraduate and graduate degrees in zoology only to see her career thwarted by institutionalized gender discrimination. Carr launched her conservation career in the 1950s while raising five children and eventually became one of the century’s leading environmental activists.

A series of ecological catastrophes in the 1960s placed Florida in the vanguard of the burgeoning environmental revolution as the nation’s developing eco-consciousness ushered in a wave of revolutionary legislation. Carr served as one of the most effective leaders of a powerful contingent of citizen activists who opposed dredging a canal across the state because it threatened an ecologically rich river valley. Under her leadership, "Free the Ocklawaha" became a rallying cry for environmentalists throughout the country.

Marjorie Harris Carr is an intimate look at this remarkable woman who dedicated her life to conserving Florida’s wildlife and wild places. It is also a revelation of how the grassroots battle to save a small but vitally important river in central Florida transformed the modern environmental movement.

Peggy Macdonald is adjunct professor of history at Stetson University.

Chronicles not only how she stopped completion of the barge canal, but also helped transform conservationism into a more science-based environmental movement while pursuing a career in science at a time when women were expected to retire after marrying.
--The News-Press

An absorbing account of a remarkable woman.
--The Gainesville Sun

An important, well-researched chronicle of a portion of Florida’s environmental history and the life of one of its prominent leaders.
--Lakeland Ledger

[A]t once a lucid account of the origins and growth of modern ecological awareness, a passionate love story of two scientists--Marjorie and Archie Carr, a perfect match in body, mind, and spirit--and a riveting narrative of how a Micanopy mom with five children negotiated the formidable obstacles of a sexist society to preserve north central Florida’s natural wonders.
--Senior Times

Marjorie Harris Carr is an intimate look at a remarkable woman who dedicated her life to conserving Florida’s unique environment.
--Ocala Star-Banner

A wonderful biography of a woman who deserves to be honored and remembered as a true environmentalist.
--Kathleen Kaska Writes (blog)

Portrays the skill and strategy that Marjorie Harris Carr used to overcome powerful social conventions and political enemies in order to chart her own path as a woman, an environmentalist, and the foremost defender of Florida’s environment.
--Journal of Southern History

A fascinating history of the environment and gender politics in Florida, a detailed chronicle of an extended legal battle between environmentalists and the Army Corps of Engineers, as well as a daring and tender love story.
--Florida Book Review