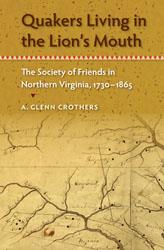 Quakers Living in the Lion's Mouth
The Society of Friends in Northern Virginia, 1730-1865

"A major contribution to our understanding of the American South and the history of American religion and reform."--Dee E. Andrews, author of The Methodists and Revolutionary America, 1760-1800

"A model study of an antislavery, reformist minority trying to find its place in the Antebellum South."--Thomas D. Hamm, author of The Transformation of American Quakerism: Orthodox Friends, 1800-1907

This examination of a Quaker community in northern Virginia, between its first settlement in 1730 and the end of the Civil War, explores how an antislavery, pacifist, and equalitarian religious minority maintained its ideals and campaigned for social justice in a society that violated those values on a daily basis.
By tracing the evolution of white Virginians’ attitudes toward the Quaker community, Glenn Crothers exposes the increasing hostility Quakers faced as the sectional crisis deepened, revealing how a border region like northern Virginia looked increasingly to the Deep South for its cultural values and social and economic ties.
Although this is an examination of a small community over time, the work deals with larger historical issues, such as how religious values are formed and evolve among a group and how these beliefs shape behavior even in the face of increasing hostility and isolation.
As one of the most thorough studies of a pre–Civil War southern religious community of any kind, Quakers Living in the Lion’s Mouth provides a fresh understanding of the diversity of southern culture as well as the diversity of viewpoints among anti-slavery activists.

A. Glenn Crothers, associate professor of history at the University of Louisville, is director of research at The Filson Historical Society and coeditor of Ohio Valley History.

"Well-researched, sprightly written, graced with a compelling and well-argued theme, spread over a period with three wars and long agitation over slavery, and apt to leave the reader aglow with approbation about a group of people who tried valiantly to live up to their profession, even as they had a far-reaching impact on sometimes antagonistic neighbors."
--FRIENDS Journal

"An excellent historical case study of a group who consciously strived to maintain compassion and empathy for all humanity, even as they agitated for social justic and modeled progressive social change."
--Virginia Magazine of History and Biography

"A welcome contribution to the study of southern history and the antislavery movement."
--The Journal of American History

"In this meticulously researched study, Crothers balances the demands of economic, social, religious, and cultural history while covering 150 years of Quaker history in northern Virginia."
--The Journal of Southern History

“An exemplary scholarly treatment of an eminent and significant manifestation of American dissent.”
--The Journal of Southern Religion

Other A. Crothers Books