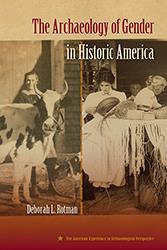 The Archaeology of Gender in Historic America


“Rich in content and engagingly written. . . . A valuable, thought-provoking synthesis of gender archaeology in the United States.”—Cambridge Archaeological Journal

“A vital resource for the interpretation of the complexities of an inclusive national history. . . . An example of fine scholarship, casting light on the various ways in which gender structures material culture across centuries.”—Public Historian

“An origin story for present-day conceptions of gender in the USA, as well as an analysis of the manifestations, mechanisms and limitations of ideology under modern capitalism.”—Social Anthropology

“Illustrate[s] the variation in gendered social relations over time and . . . consider[s] how these relations connect to other aspects of social identity, such as class or race.”—Choice

"Essential reading in gender studies, The Archaeology of Gender in Historic America shows how historical archaeology has nuanced historiography-based understandings of American gender relations."--Stacey Lynn Camp, author of The Archaeology of Citizenship

"A powerful synthesis of gender-focused archaeological research. Rotman deftly shows that the study of place and material culture can reveal diverse experiences of gender in historic North America."--Barbara L. Voss, author of The Archaeology of Ethnogenesis


Patriarchy, colonialism, and the capitalist mode of production have shaped gender through time and across many different cultures. In historic America, gendered social relations were created, codified, and reproduced through the objects used in cultural rituals, the spatial organization of houses, the construction of village landscapes, and the institutions of society, in addition to other social, ideological, economic, and political forces.


From domestic spaces to the public realm, Deborah Rotman contextualizes gender and the associated social relationships from the colonial period through the twentieth century. By exploring how individuals and families negotiated and mediated these relationships, she sheds light on how prescriptive gender categories affected those expected to follow them and examines how diverse groups responded to popular gender ideologies. Additionally, she reveals the ways gender and society influence each other, exposing how American normative notions of masculinity and femininity intersect with class, ethnicity, race, sexuality, and identity. Albeit, Rotman contends, they do not intersect in mutually supportive ways, ultimately giving rise to transformative social changes.


Deborah L. Rotman is the Paul and Maureen Stefanick Faculty Director for the Center for Undergraduate Scholarly Engagement at the University of Notre Dame. She is the author of Historical Archaeology of Gendered Lives and coeditor of Shared Spaces and Divided Places: Material Dimensions of Gender Relations and the American Historical Landscape.

Illustrate[s] the variation in gendered social relations over time and . . . consider[s] how these relations connect to other aspects of social identity, such as class or race. . . . Recommended.
--CHOICE

A very ambitious book that covers roughly two hundred years and an entire continent....An important overview of many topics that could be used in conjunction with case studies for an expanded understanding of the archaeology of gender in historic America.
--American Anthropologist

Rotman’s approach enlarges our understanding of the past . . . that directly informs our conception of gender in the present.
--Social Anthropology

These case studies will assist in rethinking how gender has formed a structured experience in the past, as well as framing our representations of history in the present.
--Public Historian