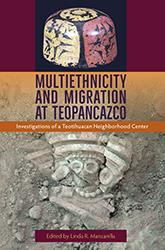 Multiethnicity and Migration at Teopancazco
Investigations of a Teotihuacan Neighborhood Center


"Illuminates a multiethnic neighborhood within one of the world’s greatest urban developments of ancient times. Presents some of the most sophisticated new scientific techniques that are allowing scholars to see the details of life in the ancient world in a vivid dimension that has not before been possible."--Cynthia Robin, author of Everyday Life Matters: Maya Farmers at Chan

"Manzanilla has been, and still is, a pioneer in the application of recent technology to aid in the interpretation of archaeological remains."--Rebecca Storey, author of Life and Death in the Ancient City of Teotihuacan: A Modern Paleodemographic Synthesis

"Vital for scholars of Mesoamerican archaeology and the 'Classic' period in particular."--Ian Farrington, author of Cusco: Urbanism and Archaeology in the Inka World


Like modern-day New York City, the ancient city of Teotihuacan in Central Mexico was built by a flood of immigrants who created a complex and diverse urban landscape. The city benefited from the knowledge, technical expertise, and experience that foreigners brought. The neighborhoods also competed with each other in displaying the finest crafts, the rarest raw materials, and the most lavish sumptuary goods.


This detailed volume looks at 116 formal burials in Teopancazco, a powerful neighborhood that controlled the distribution of foreign raw materials from Teotihuacan toward Nautla in Veracruz. Applying sophisticated bioarchaeological analyses of stable and strontium isotopes, trace elements, funerary patterns, and ancient DNA, this holistic study identifies the population’s age and sex profiles, paleopathologies, paleodiet, provenance, and facial approximations. What emerges is a detailed portrait of a multiethnic group working and interacting in one of the largest urban sites in the preindustrial world.

Linda R. Manzanilla, professor and researcher at the Institute of Anthropological Research at the National Autonomous University of Mexico, and member of El Colegio Nacional, is editor or coeditor of several books, including The Neighborhood as a Social and Spatial Unit in Mesoamerican Cities and Domestic Life in Prehispanic Capitals: A Study of Specialization, Hierarchy, and Ethnicity.