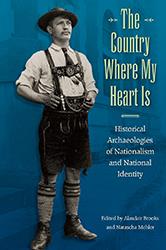 
“Excellent. . . . Place[s] historical archaeology and its contributory strengths at the fore.”—Historical Archaeology

“Fills a gap in the literature on the relationship between nationalism and archaeology in the modern period.”—European Journal of Archaeology

“Much needed. Fills an existing gap in the historical period with a wide range of examples from all over the world.”—Margarita Díaz-Andreu, author of A World History of Nineteenth-Century Archaeology: Nationalism, Colonialism, and the Past

“Provides new, nuanced perspectives that will inspire studies in the materiality of identity creation and transformation in the past and its role in heritage creation in the present.”—Stephen A. Brighton, author of Historical Archaeology of the Irish Diaspora: A Transnational Approach

“Thoughtful, challenging, and original. Expands the spatial and temporal parameters of the growing literature on nationalism and national identity.”—Philip L. Kohl, coeditor of Selective Remembrances: Archaeology in the Construction, Commemoration, and Consecration of National Pasts

The Country Where My Heart Is explores the archaeology of the period during which modern nationalism developed. While much of the previous research has focused on how governments and other institutions manipulate the archaeology of the distant past for ideological reasons, the contributors to this volume articulate what material artifacts of the modern world can reveal about the rise and fall of modern nationalism and national identities.

They explore themes of colonialism, religion, political power and struggle, mythmaking, and the formation of heritage and memory not only in modern nation-states but also in places where the geographical boundaries of a “homeland” are harder to draw. Featuring case studies from northwestern and Central Europe, the Mediterranean, and the Americas, the essays examine how historical archaeology informs the concept of national identity and the formation of the modern nation and how this identity is intimately and inseparably entangled with, yet still distinct from, ethnicity and race.

Alasdair Brooks, honorary visiting fellow at the University of Leicester, is the editor of The Importance of British Material Culture to Historical Archaeologies of the Nineteenth Century. Natascha Mehler, senior researcher at the German Maritime Museum and honorary reader at the University of the Highlands and Islands, Scotland, is the editor of Historical Archaeology in Central Europe.