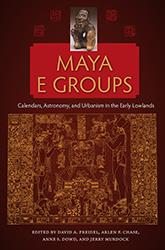 
“The breadth, detail, and perspectives provided in this volume make it a must for students of complex society and especially Maya scholars.”—Latin American Antiquity

“An extremely valuable volume that encapsulates the scholarship to date and advances it further for the future. . . . This will be a foundational reference for the next several decades.”—Current Anthropology

“Leading archaeologists present the most recent evidence on a complex of architecture, iconography, and artifacts closely linked to the rise of the divine kingships of the an­cient Maya. An important volume for anyone interested in the rise of ancient states.” —Arthur Demarest, author of Ancient Maya: The Rise and Fall of a Rainforest Civilization

“E Groups have proven to be older, more complex, and more variable than we might have anticipated even a generation ago. New data presented and interpreted here will inform the next generation of researchers and enthrall Maya enthusiasts everywhere.” —Debra S. Walker, editor of Perspectives on the Ancient Maya of Chetumal Bay

As complex societies emerged in the Maya lowlands during the first millen­nium BCE, so did stable communities focused around public squares and the worship of a divine ruler tied to a Maize God cult. “E Groups,” central to many of these settle­ments, are architectural complexes: typically, a long platform supporting three struc­tures and facing a western pyramid across a formal plaza. Aligned with the movements of the sun, E Groups have long been interpreted as giant calendrical devices crucial to the rise of Maya civilization. This volume presents new archaeological data to reveal that E Groups were constructed earlier than previously thought. In fact, they are the earliest identifiable architectural plan at many Maya settlements.

More than just astronomical observatories or calendars, E Groups were a key ele­ment of community organization, urbanism, and identity in the heart of the Maya lowlands. They served as gathering places for emerging communities and centers of ritual; they were the very first civic-religious public architecture in the Maya lowlands. Investigating a wide variety of E Group sites—including some of the most famous like the Mundo Perdido in Tikal and the hitherto little known complex at Chan, as well as others in Ceibal, El Palmar, Cival, Calakmul, Caracol, Xunantunich, Yaxnohcah, Yaxuná, and San Bartolo—this volume pieces together the development of social and political complexity in ancient Maya civilization.

David A. Freidel is professor of anthropology at Washington University in St. Louis. Arlen F. Chase is professor of anthropology at Pomona College, Claremont. Anne S. Dowd, an archaeologist with a federal agency, is coeditor of Cosmology, Calendars, and Horizon-Based Astronomy in Ancient Mesoamerica. Jerry Murdock is a member of the Board of Trustees for the Santa Fe Institute and the Aspen Institute.

A volume in the series Maya Studies, edited by Diane Z. Chase and Arlen F. Chase

Maya Kingship: Rupture and Transformation from Classic to Postclassic Times

The Real Business of Ancient Maya Economies: From Farmers’ Fields to Rulers’ Realms