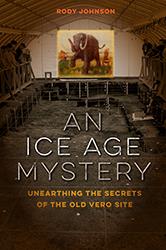 
“Tells the fascinating story of bones unearthed in 1915 by a geologist who maintained they proved humans lived contemporaneously with mammoths. . . . A good read!”—DIG Magazine

“This lively and fascinating book is an intelligent examination of how scientific endeavor operates over time and how community life can be focused and energized. It’s also filled with portraits of colorful personalities.”—Florida Weekly

"A fascinating recounting of the early discovery of a Paleolithic human and the issues that were engendered by various opposing scientific views of the validity of the discovery and its analysis."--Dennis Stanford, coauthor of Across Atlantic Ice: The Origin of America's Clovis Culture

"Since the site's discovery long ago, the complete story of the Old Vero Site has never been told. This is an informative and entertaining account of this remarkable site and its history in American archaeology."--Thomas D. Dillehay, author of The Settlement of the Americas: A New Prehistory

"Johnson has thoroughly investigated, and transformed into a very readable narrative, an entire century of accumulated knowledge about the research, controversy, and curiosity surrounding the Old Vero archaeological site."--Barbara A. Purdy, author of Florida's People During the Last Ice Age

"Johnson skillfully weaves a tale of prehistoric life in Florida with the 100-year search to understand that long lost world at the Vero Site."--Andy Hemmings, Florida Atlantic University


In 1916, to the shock of the scientific community and the world at large, a Florida geologist discovered human remains mixed with the bones of prehistoric animals in a Vero Beach canal and proclaimed that humans had lived in North America since the Ice Age. These new findings by Elias Sellards flew in the face of prevailing wisdom, which held that humans first came to the continent only 6,000 years ago. His claim was snubbed by the top scientists of his day, he was laughed out of the state, Vero's fame declined, and the skull Sellards found--famously known as "Vero Man "--was lost.


An Ice Age Mystery tells the story of Sellards's exciting find and the controversy it sparked. In the years that followed, other archaeological discoveries and the rise of radiocarbon dating established that humans did arrive in North America earlier than previously thought. The skull, however, was never recovered, and many people began to wonder: What exactly had Sellards found at Vero? And what else might be buried there?


One hundred years after the first Vero discovery, construction plans threatened to cover up the legendary dig site, and a band of citizens and archaeologists protested. Excavations were reopened. Archaeologists uncovered 14,000-year-old burnt mammal bones and charcoal, signs of a human presence, and found further evidence to indicate a continuous human occupation of the site for several thousand years. Prior to the latest excavations an etching on a bone possibly 13,000 years old was discovered that could be the oldest piece of art in America. Sellards had been right all along.


Many questions still remain. Who were these people? Where did they come from? And how did they get here? This book draws readers into the past, present, and future of one of the most historic discoveries in American archaeology.


Rody Johnson is the author of several books, including Chasing the Wind: Inside the Alternative Energy Battle; The Rise and Fall of Dodgertown: 60 Years of Baseball in Vero Beach; and Different Battles: The Search for a World War II Hero.

This lively and fascinating book is an intelligent examination of how scientific endeavor operates over time and how community life can be focused and energized. It’s also filled with portraits of colorful personalities.
--Florida Weekly

Tells the fascinating story of bones unearthed in 1915 by a geologist who maintained they proved humans lived contemporaneously with mammoths. . . . A good read!
--DIG Magazine

The Rise and Fall of Dodgertown: 60 Years of Baseball in Vero Beach