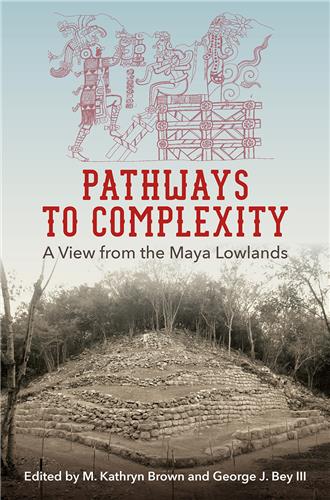 Pathways to Complexity
A View from the Maya Lowlands


“Richly detailed. . . . Bring[s] together recent advancements in studies of the development of Maya civilisation.”—Antiquity

“An impressive conspectus of expertise spanning Maya fieldwork from the Valley of Guatemala to northern Yucatan.”—Latin American Antiquity


“Packed with data, presented in relatively concise chapters and coming from a wide geographical range, including not just the Southern, Central, and Northern Lowlands, but also a case from the Guatemalan Highlands.”—Journal of the Royal Anthropological Institute

"A treasure trove of new information and fresh ideas about the origins of Maya civilization. Pathways to Complexity will help set the agenda for investigation of ancient Maya origins for many years to come."—Christopher A. Pool, author of Olmec Archaeology and Early Mesoamerica

"An exciting volume with new discoveries, surprising evidence, bold interpretations, and much internal debate. These chapters will pull any serious archaeologist into the controversies concerning the rise of early Maya civilization."—Arthur A. Demarest, Ingram Chair in Anthropology, Vanderbilt University

Pathways to Complexity synthesizes a wealth of new archaeological data to illuminate the origins of Maya civilization and the rise of Classic Maya culture. In this volume, prominent Maya scholars argue that the development of social, religious, and economic complexity began during the Middle Preclassic period (1000–300 B.C.), hundreds of years earlier than previously thought.

Contributors reveal that villages were present in parts of the lowlands by 1000 B.C., challenging the prevailing models estimating when civilization took root in the area. Combining recent discoveries from the northern lowlands—an area often neglected in other volumes—and the southern lowlands, the collection then traces the emergence of sociopolitical inequality and complexity in all parts of the Yucatan peninsula over the course of the Middle Preclassic period. They show that communities evolved in different ways due to influences such as geographical location, ceramic exchange, shell ornament production, agricultural strategy, religious ritual, ideology, and social rankings. These varied pathways to complexity developed over half a millennium and culminated in the institution of kingship by the Late Preclassic period.

Presenting exciting work on a dynamic and poorly understood time period, Pathways to Complexity demonstrates the importance of a broad, comparative approach to understanding Preclassic Maya civilization and will serve as a foundation for future research and interpretation.

M. Kathryn Brown, Lutcher Brown Endowed Professor of Anthropology at the University of Texas at San Antonio, is coeditor of Ancient Mesoamerican Warfare and A Forest of History: The Maya after the Emergence of Divine Kingship.

A volume in the series Maya Studies, edited by Diane Z. Chase and Arlen F. Chase