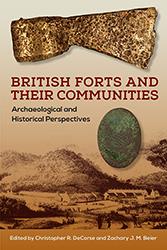 British Forts and Their Communities
Archaeological and Historical Perspectives


“The ten case studies represented in this volume demonstrate the complexity of the fort communities, and the role archaeology plays in seeking the whole story.”—American Archaeology

“A fresh approach to far-flung British forts that unravels the diverse ethnicities of each fort’s garrison and support community, thereby revealing the complex and imperfect ways British imperialists imposed colonialism across the globe.”—Gregory A. Waselkov, author of A Conquering Spirit: Fort Mims and the Redstick War of 1813–1814

“Demonstrates that the study of British forts is as diverse and complex as the communities that developed within and around these fortifications.”—Todd Ahlman, director of the Center for Archaeological Studies, Texas State University

While the military features of historic forts usually receive the most attention from researchers, this volume focuses instead on the people who met and interacted in these sites. Contributors to British Forts and Their Communities look beyond the defensive architecture, physical landscapes, and armed conflicts to explore the complex social diversity that arose in the outposts of the British Empire.

The forts investigated here operated at the empire’s peak in the seventeenth, eighteenth, and nineteenth centuries, protecting British colonial settlements and trading enclaves scattered across the globe. Locations in this volume include New York State, Michigan, the St. Lawrence River, and Vancouver, as well as sites in the Caribbean and in Africa. Using archaeological and archival evidence, these case studies show how forts brought together people of many different origins, ethnicities, identities, and social roles, from European soldiers to indigenous traders to African slaves.

Characterized by shifting networks of people, commodities, and ideas, these fort populations were microcosms of the emerging modern world. This volume reveals how important it is to move past the conventional emphasis on the armed might of the colonizer in order to better understand the messy, entangled nature of British colonialism and the new era it helped usher in.

Christopher R. DeCorse, professor of anthropology at Syracuse University, is coauthor of Anthropology: A Global Perspective. Zachary J. M. Beier is lecturer in the Department of History and Archaeology at the University of the West Indies at Mona, Jamaica.