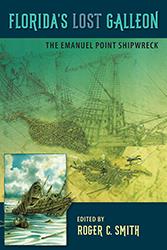 “This captivating book is a literary landmark detailing Florida’s colonial experience, and it is a compelling text for any student of maritime history and archaeology.”—Journal of Southern History

“This much-anticipated book gives us a thorough and extremely readable account of Tristán de Luna’s tragic expedition to Florida. It is also a fascinating story of how these long-lost shipwrecks are found and excavated.”—Kathleen Deagan, coauthor of Fort Mose: Colonial America’s Black Fortress of Freedom

“Exciting and gripping. This wonderful book tells the story of the ship, the people who built and sailed it, the time in which it was built, the exploration of the New World, and the dreams and hopes of the first Europeans to immigrate to the Americas.”—Filipe Vieira de Castro, author of The Pepper Wreck: A Portuguese Indiaman at the Mouth of the Tagus River

“Meticulously details how the ship was found, its historical background, methods of excavation, procedures of artifact conservation, and local participation. All in all, most satisfying.”—George F. Bass, editor of Ships and Shipwrecks of the Americas: A History Based on Underwater Archaeology

“A welcome addition to the archaeological literature of America’s Spanish colonial experience, this volume offers a compelling look at the oldest wreck found in Florida.”—James P. Delgado, coauthor of The Maritime Landscape of the Isthmus of Panamá

In 1559, Spanish explorer Tristán de Luna led a fleet of ships from Mexico to Pensacola Bay to settle the Florida frontier for the Kingdom of Spain. But a hurricane struck soon after his arrival, destroying the small colony and sinking six of his ships. Few significant remains were uncovered for more than 400 years—until a ship was found underwater off Emanuel Point in modern-day Pensacola.

Florida’s Lost Galleon documents the groundbreaking discovery of the earliest shipwreck found in Florida. Underwater archaeologists describe how they explored the ship’s hull and recorded it carefully in order to reconstruct the original vessel and its last mission. They take readers into the laboratory, where they explain how the waterlogged objects they uncovered were analyzed and prepared for public display. The story of the ill-fated colony unfolds as they discuss the large amount of surprisingly well-preserved Spanish colonial artifacts, including armor, ammunition, plant and animal remains, and wooden and metal tools.

The excavation of the Emanuel Point shipwreck was driven by the enthusiasm and support of local volunteers, and this volume highlights the importance of such public archaeology projects. Florida’s Lost Galleon invites readers to experience the exciting world of marine archaeology as it opens up a forgotten chapter in American history.

Roger C. Smith served as state underwater archaeologist for the Florida Bureau of Archaeological Research for three decades. He is the author of Vanguard of Empire: Ships of Exploration in the Age of Columbus and The Maritime Heritage of the Cayman Islands, coauthor of An Atlas of Maritime Florida, and editor of Submerged History: Underwater Archaeology in Florida.