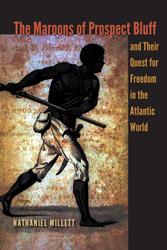 "A lively story that not only details the fort’s rise and fall but also carefully fits its fate into the larger picture of Anglo-American imperial rivalry and the meaning of freedom in an age of revolution."--Robert Paquette, coauthor of The Oxford Handbook of Slavery in the Americas

"By examining the maroon community that formed at Prospect Bluff after the War of 1812, Millett reveals how anti-slavery radicalism threatened to rewrite the history of race in the Early Republic."--Andrew K. Frank, author of Creeks and Southerners: Biculturalism on the Early American Frontier


During the War of 1812, Edward Nicolls of the Royal Marines armed ex-slaves, Red Sticks, and Seminoles to fight alongside the British from a fort erected at Prospect Bluff in the Florida panhandle. This so-called Negro Fort became the largest maroon community ever to emerge in North America. Fervently opposed to slavery, Nicolls galvanized the Prospect Bluff allies with his radical anti-slavery ideology and the promise of freedom, asserting their rights and privileges equal to those of any British subject.

At war’s end, Nicolls remained at Prospect Bluff, petitioning American officials to respect the territorial sovereignty of his Indian allies. When diplomacy failed, Nicolls left the fort to his black army of radicalized British subjects and encouraged it to defend the territory against all threats. What developed was a well-organized community that regarded itself as an independent British polity.

Nathaniel Millett examines how the Prospect Bluff maroons constructed their freedom, shedding light on the extent and limits of their physical and intellectual fight to claim their rights. He compares their settlement extensively with maroon communities across the Americas, emphasizing the rare opportunity offered by Prospect Bluff to examine black consciousness during the era of slavery.

Provide[s] an Atlantic World perspective on the black experience during this period.
--CHOICE

Millett has breathed new life into a piece of Florida history that was a national topic of discussion in the 19th century but lost its purchase in the Jim Crow milieu of the 20th.
--Florida Times-Union

A hallmark achievement in the discussion of slavery and abolition in the Atlantic… The Maroons of Prospect Bluff is phenomenal and a welcome addition to our understanding of maroon and Atlantic culture.
--Journal of Transatlantic Studies

Millett is able to address a plethora of questions that have plagued historians of slavery regarding conceptions of freedom.
--Florida Historical Quarterly

By placing this understudied event in a controversial interpretive framework, Nathaniel Millett has written a valuable book that historians of the African diaspora and the Atlantic world will enjoy grappling with.
--Hispanic American Historical Review

Millett has lifted the curtain of obscurity that fell over this remarkable Maroon community. His impeccably comprehensive study has provided an in-depth perspective on the humanity of African freedom seekers and their advocates absent from the majority of historical texts.
--Journal of American History

Provides readers with valuable new information and insights into the complex international intrigues and rich racial and ethnic tapestry that provided the back drop for the formation of this new maroon society.
--American Historical Review

The Maroons of Prospect Bluff, in short, is highly stimulating and worth reading and assigning.
--Itinerario Review

An illuminating and long-overdue treatment of Prospect Bluff that contextualizes the settlement through the lens of an Atlantic borderland experience playing out in the whirlwind of military conquests between varying European powers--Britain and Spain--and other groups in the North American continent and Caribbean--white Americans, groups of Native Americans, and people of African descent. . . . Millet delivers a careful exploration of the history, culture, and politics of the Prospect Bluff settlers, following them as they scatter to other maroon colonies like Angola near Tampa, struggle through the Seminole Wars and the annexation of Florida by the United States, and eventually move to Andros Island in the Bahamas.
--Louisiana History