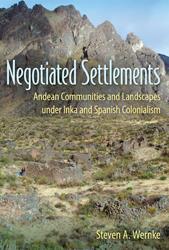 "A refreshing and long overdue perspective in historical archaeology that has the potential to provide new insights into the ways in which colonial relations were played out not just in the Colca Valley but elsewhere as well. This is a groundbreaking book that will inspire historical archaeologists to systematically examine the broader social and natural landscapes in which individual sites are located."--Mary L. Van Buren, Colorado State University

This multidisciplinary--indeed, transdisciplinary--combination of archaeological, historical, and ethnographic research reveals how the Andean people of southern Peru's Colca Valley experienced and responded to successive waves of colonial rule by the Inka and Spanish empires from the fifteenth through seventeenth centuries.
While most research splits the prehispanic and post-conquest eras into separate domains of study, Steven Wernke's perspective explicitly combines archaeological and documentary sources to bridge the Spanish conquest of the Andes. He integrates GIS-based spatial analyses of documentary sources with archaeological survey and the only excavations of an early Spanish doctrinal settlement in the highland Andes to present a local perspective on how new communities and landscapes emerged as part of a continuous process of adapting to consecutive imperial occupations. Wernke's findings show how Spanish ideals of urban order penetrated this rural provincial setting as early as the first generation after the conquest, as well as the ways the integration of Spanish ideals depended on their resonance with prehispanic Andean precedents.
Through integration of empirical research and social theory, this volume contributes to current debates on colonial and postcolonial theory, historical anthropology, and the growing field of colonial archaeology. At ease whether examining religious practice at early Franciscan mission settlements or reconstructing prehispanic Andean land use, Wernke argues that we should avoid thinking of relations within the Inka and Spanish states as a dichotomy between colonizers and colonized; instead he traces how new kinds of communities and landscapes were co-produced at the local scale.

Steven A. Wernke is assistant professor of anthropology at Vanderbilt University.

"A must have for all Peruvian archaeologists,enthnohistorians, and historians, as well as for Andeanists in general…Richly illustrated and documented…Essential."
--CHOICE

“A groundbreaking study which has set the bar high for further prehistoric and colonial archaeologists working in the Andes and elsewhere… excels at smashing traditional disciplinary boundaries and methodologies and underscores the need for late prehistoric and colonial period archaeologists to develop a larger and more sophisticated toolkits in the study of cultural landscapes.”
--Journal of Anthropological Research

“Impressive…The Combination of methods employed in this book and the nuanced perspectives they provide draw attention to the contrasting visions of colonization produced by textual records and material evidence. Indeed, Wernke provide us with a thorough and well-thought-out research that doesn’t seek easy explanations but rather welcomes contradictory evidence that complicates our understanding of complex historical and cultural contexts.”
--Hispanic American Historical Review

“Creatively integrates highly detailed and extensive sets of archaeological and ethnohistoric information in a place-based landscape narrative in the tradition of cultural geography, but it does so with clear anthropological focus….a compelling narrative about local adaptation to colonialism”
--American Anthropologist

“Negotiated Settlements is a detailed account of how Andean people experienced, managed, and manipulated two foreign colonial projects. The book offers a unique perspective on cultural principles in the Andes over a continuous period spanning “pre-Columbian” and “post-conquest” eras – eras that archaeologists and historians typically do not compare because they separate them into distinct analytical fields. The book is theoretically profound, methodologically sophisticated, beautifully illustrated, and empirically rich. It will surely be an instant classic in the anthropological literature on colonialism.”
--Historical Archaeology

Uses field surveys, excavations, colonial documentation, and toponym analysis to reconstruct how the Inkas and the Spanish each made their impact on the villages of peasant farmers. . . .Will have a major impact on the field.
--Colonial Latin American Historical Review