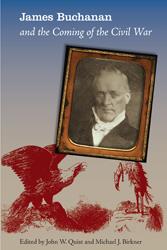 "Provides scholars with a fresh and thoughtful examination of the first administration that had to deal with Southern secession."--Jonathan M. Atkins, author of Politics, Parties, and the Sectional Conflict in Tennessee, 1832-1861

As James Buchanan took office in 1857, the United States found itself at a crossroads. Dissolution of the Union had been averted and the Democratic Party maintained control of the federal government, but the nation watched to see if Pennsylvania's first president could make good on his promise to calm sectional tensions.
Despite Buchanan's central role in a crucial hour in U.S. history, few presidents have been more ignored by historians. In assembling the essays for this volume, Michael Birkner and John Quist have asked leading scholars to reconsider whether Buchanan’s failures stemmed from his own mistakes or from circumstances that no president could have overcome.
Buchanan's dealings with Utah shed light on his handling of the secession crisis. His approach to Dred Scott reinforces the image of a president whose doughface views were less a matter of hypocrisy than a thorough identification with southern interests. Essays on the secession crisis provide fodder for debate about the strengths and limitations of presidential authority in an existential moment for the young nation.
Although the essays in this collection offer widely differing interpretations of Buchanan's presidency, they all grapple honestly with the complexities of the issues faced by the man who sat in the White House prior to the towering figure of Lincoln, and contribute to a deeper understanding of a turbulent and formative era.

"For anyone interested in the political crisis that led to the war, this is an excellent primer and good reading, too."
--Civil War History (Blog)

"A much needed, and satisfyingly comprehensive, reassessment of the Buchanan Presidency from a variety of informed perspectives. This is one of the must-read political history books of the year."
--Civil War Books and Authors

"Essential reading for a better understanding of the years immediately preceding the Civil War."
--Association for Mormon Letters

"Buchanan is often saddled with the title of 'the worst U.S. president,' blamed for not averting the Civil War. . . . [This] new book . . . hopes to reignite the debate."
--BBC News Magazine

"A portrait of the fifteenth presidents that acknowledges his weaknesses and shortcomings, yet also recognizes that his failures were not universal."
--Civil War Book Review

"A fine complement to earlier work and a timely contribution during the sesquicentennial of the Civil War."
--Pennsylvania Magazine of History and Biography

"Buchanan’s management of the secession crisis is at the heart of the book, and its bounty of informed views on his role during this seminal moment in American history is refreshingly diverse. The collection might very well come to be regarded as the most comprehensive and useful reconsideration of the Buchanan presidency."
--The Civil War Monitor

“The impressive set of contributors to the volume… explore diverse aspects of Buchanan’s presidency and offer different judgments of his performance.”
--American Historical Review

"Buchanan's story is a fascinating one."
--WITF Smart Talk

“An especially rewarding book… these essays are written by adept historians at the top of their game, and they make for good reading… The intellectual verve with which the writers dispute Buchanan’s record make those essays especially tempting.”
--The Journal of American History