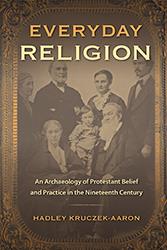 "A model for researching how religion shaped daily life that helps move the archaeology of religion beyond houses of worship and places of burial."--Richard F. Veit, author of Digging New Jersey's Past: Historical Archaeology in the Garden State

"Demonstrates convincingly that religious ideology--specifically a lifestyle of temperance and simplicity as advocated by evangelical Christians--was an important factor in the household consumption decisions in a small community in New York."--Charles LeeDecker, Historic Preservation archaeologist


In the early nineteenth century, antebellum America witnessed a Second Great Awakening led by evangelical Protestants who gathered in revivals and contributed to the blossoming of social movements throughout the country. Preachers and reformers promoted a Christian lifestyle, and evangelical fervor overtook entire communities. One such community in Smithfield, New York, led by activist Gerrit Smith, is the focus of Hadley Kruczek-Aaron's study.

Investigating the wealthy Smith family's material worlds--meals, attire, and domestic wares--Kruczek-Aaron reveals how they engaged their beliefs to maintain a true Christian home. While Smith spread his practice of lived religion to the surrounding neighborhood, incongruities between his faith and his practice of that faith surface in the study, demonstrating the trials he and all converts faced while striving to lead a virtuous life.

Everyday Religion reveals how Second Great Awakening ideals affected consumption and daily life as much as socioeconomic status, purchasing power, access to markets, and other social factors. Class, gender, ethnicity, and race further influenced the actions of devout individuals and continue to shape how the history of religion and reform is presented and commemorated today.

Hadley Kruczek-Aaron is associate professor of anthropology at the State University of New York at Potsdam.

Will prove to be a key resource for . . . challenging any assumption that Second Awakening revivals primarily attracted those of lower economic level. . . . Recommended.
--CHOICE

A valuable contribution to the history of antebellum reform movements....Its blend of archival and archaeological sources suggests promising new avenues in the history of American religion.
--H-Net

A Desolate Place for a Defiant People: The Archaeology of Maroons, Indigenous Americans, and Enslaved Laborers in the Great Dismal Swamp