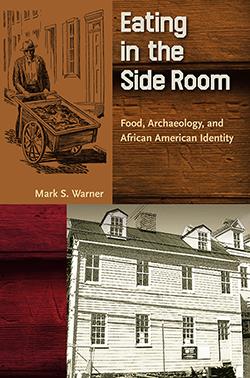 Eating in the Side Room
Food, Archaeology, and African American Identity


An archaeological study of African American foodways in nineteenth-century Annapolis


“A timeless publication and significant contribution to the discipline. . . . Students of African America will find Warner’s book an illuminating study, and a strong example to follow.”—Historical Archaeology

“A striking interdisciplinary analysis. . . . Underscores the value of zooarchaeological analysis in informing our understanding of the past, especially of people devalued and muted in our mainstream historical texts.” —American Anthropologist

“Rooted in a meticulous study of the faunal remains excavated at an Annapolis, Maryland, house, Mark S. Warner’s book addresses sweeping questions about race, resistance, and identity.”—Journal of Southern History

“Demonstrates the influence of mass consumer culture on African-American diets and the role played by food in establishing African-American identity and resistance to racism and oppression.”—Civil War Book Review


"Warner powerfully demonstrates the role of food in shaping and defining social identity as it pertains to African American life in the racialized United States. His careful analysis of archaeological materials supplemented with other sources such as quilts and blues lyrics--sources seldom used in historical archaeology—is instructive and inspiring."—Charles E. Orser Jr., author of The Archaeology of Race and Racialization in Historic America


By studying the meat purchasing habits of two African American families—the Maynards and the Burgesses—Warner skillfully demonstrates that while African Americans were actively participating in a growing mass consumer society, their food choices subtly yet unequivocally separated them from white society. The "side rooms" where the two families ate their meals not only satisfied their hunger but also their need to maintain autonomy from an oppressive culture. As a result, Warner claims, the independence that African Americans practiced during this time helped prepare their children and grandchildren to overcome persistent challenges of white oppression.


Publication of the paperback edition made possible by a Sustaining the Humanities through the American Rescue Plan grant from the National Endowment for the Humanities.