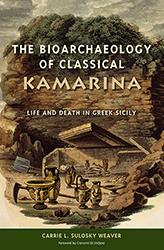 The Bioarchaeology of Classical Kamarina
Life and Death in Greek Sicily

"A true, balanced bioarchaeological work of scholarship elucidating the way of life and death for the people of Passo Marinaro."--Sherry C. Fox, coeditor of New Directions in the Skeletal Biology of Greece

"This excellent study--comprehensive in its research, sophisticated in its theory, meticulous in its analysis, lucid in its presentation--sets a new standard in the young, exciting field of the bioarchaeology of the early Greek world."--Joseph L. Rife, author of Isthmia IX: The Roman and Byzantine Graves and Human Remains

"Sulosky Weaver eloquently weaves Greek myth and historical accounts of Greek life into her scientific analysis of the bioarchaeological evidence, providing a synthetic account of life at the Greek colony of Kamarina."--Britney Kyle McIlvaine, University of Northern Colorado


Sicily was among one of the first areas settled during the Greek colonization movement, making its cemeteries a popular area of study for scholars of the classical world. Yet these studies have often considered human remains and burial customs separately. In this seminal work, Carrie Sulosky Weaver synthesizes skeletal, material, and ritual data to reconstruct the burial customs, demographic trends, state of health, and ancestry of Kamarina, a city-state in Sicily.


Using evidence from 258 recovered graves from the Passo Marinaro necropolis, Sulosky Weaver suggests that Kamarineans--whose cultural practices were an amalgamation of both Greek and indigenous customs--were closely linked to their counterparts in neighboring Greek cities. The orientations of the graves, positions of the bodies, and the types of items buried with the dead--including Greek pottery--demonstrate that Kamarineans were full participants in the mortuary traditions of Sicilian Greeks. Likewise, cranial traits resemble those found among other Sicilian Greeks. Interestingly, evidence of cranial surgery, magic, and necrophobic activities also appeared in Passo Marinaro graves--another example of how Greek culture influenced the city.


An overabundance of young adult skeletal remains, combined with the presence of cranial trauma and a variety of pathological conditions, indicates the Kamarineans may have been exposed to one or more disruptive events, such as prolonged wars and epidemic outbreaks. Despite the tumultuous nature of the times, the resulting portrait reveals that Kamarina was a place where individuals of diverse ethnicities and ancestries were united in life and death by shared culture and funerary practices.


Carrie L. Sulosky Weaver is a Kenneth P. Dietrich School of Arts and Sciences Postdoctoral Fellow at the University of Pittsburgh in the Department of History of Art and Architecture.

Important. . . . provides a holistic reconstruction of a turbulent and dynamic era as experienced by the Greek diaspora.
--Phoenix