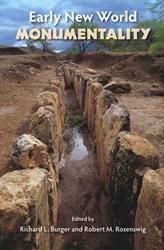 "Offers a number of interesting case studies of New World monumentality that expand our comparative understanding of the phenomenon."--Dean J. Saitta, University of Denver

"Brings together important essays that analyze the context, nature, and impact of early monuments in the Americas. Early New World Monumentality should be read by everyone interested in monumentality anywhere in the world."-- Michael Love, California State University

In studies of ancient civilizations, the focus is often on the temples, palaces, and buildings created and then left behind, both because they survive and because of the awe they still inspire today. From the Mississippian mounds in the United States to the early pyramids of Peru, these monuments have been well-documented, but less attention has been paid to analyzing the logistical complexity involved in their creation.
In this collection, prominent archaeologists explore the sophisticated political and logistical organizations that were required to plan and complete these architectural marvels. They discuss the long-term political, social, and military impacts these projects had on their respective civilizations, and illuminate the significance of monumentality among early complex societies in the Americas.
Early New World Monumentality is ultimately a study of labor and its mobilization, as well as the long-term spiritual awe and political organization that motivated and were enhanced by such undertakings. Mounds and other impressive monuments left behind by earlier civilizations continue to reveal their secrets, offering profound insights into the development of complex societies throughout the New World.

Richard L. Burger, professor of anthropology at Yale University, is the author of several books on South American prehistory, including Chavin and the Origins of Andean Civilization. Robert M. Rosenswig, associate professor of archaeology at the University of Albany-SUNY, is the author of The Beginnings of Mesoamerican Civilization: Inter-Regional Interaction and the Olmec.

"Highly significant for students and scholars of comparative civilizations."
--CHOICE

Modes of Production and Archaeology