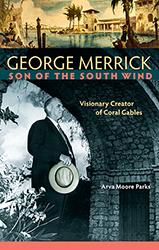 "The reader is left breathless by the whirlwind achievements of master suburban planner and visionary George Merrick, so excellently written and documented. George Merrick, Son of the South Wind takes us on Merrick's journey through pastoral grapefruit groves to a meticulous and innovative Coral Gables and its melancholy conclusion."--Howard Kleinberg, former editor of the Miami News

"At once an epic and sweeping story of the making of a place and a profoundly intimate story of a man and his dreams."--Beth Dunlop, editor of Modern Magazine

"Parks brings George Merrick to life--his resources and passions, his colleagues and his adversaries. She guides us through the earliest guava groves to the City of Coral Gables we see today, providing insight into its creation and provoking reflection on our responsibility for stewardship."--Joanna Lombard, coauthor of Historic Landscapes of Florida

"Parks has written a passionate, compelling biography of George Merrick, one of America's earliest developers of a carefully planned, Mediterranean-styled community."--Paul S. George, author of Along the Miami River and Little Havana

The story of developers selling off the Sunshine State is as old as the first railroad tracks laid across the peninsula. But seldom do we hear about the men who actually built a better Florida. In George Merrick, Son of the South Wind, South Florida historian Arva Moore Parks recounts George Merrick's quest to distinguish himself from the legions of developers who sought only profit.

Helping to create the land boom of the 1920s, Merrick transformed his family's citrus grove just outside of Miami into one of the finest planned communities: the "master suburb" of Coral Gables. With a team of architects and city planners, he built homes for the growing middle class in the Mediterranean Style using local stone, while investing in public infrastructure by designing and building parks and pools, trolley lines and waterways. He pledged land for a library and the university that would become the University of Miami. Hailed in national publications as a visionary, Merrick was green before green, a New Urbanist before the movement even had a name.

As Coral Gables and Merrick prospered, he reinvested in education, affordable housing, and other progressive causes. But the Great Depression ravaged Miami, and Merrick's idealism cost him his fortune. He died with an estate worth less than $400.

Ralph Waldo Emerson, whose essays and poems inspired Merrick, wrote, "An institution is the lengthened shadow of one man," and Merrick's legacy is imbued in every stone and every tree of Coral Gables.

With unprecedented access to the Merrick family, and mining a treasure trove of Merrick's personal letters, documents, speeches, and manuscripts, Parks presents the remarkable story of George Merrick and the development of one of the nation's most iconic planned cities.

Arva Moore Parks is the former chief curator, interim director, and chair of the Coral Gables Museum. She is the author of numerous books on Florida history, including The Forgotten Frontier: Florida through the Lens of Ralph Middleton Munroe and Miami, the Magic City.

A sweeping account of how one man came to symbolize the optimism of his time and how his idea for a ‘master suburb’ with plenty of greenery would prove prescient.
--Miami Herald