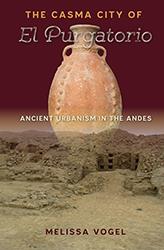 The Casma City of El Purgatorio
Ancient Urbanism in the Andes


“Makes a substantial contribution to the study of ancient civilizations.”—Latin American Antiquity

“A strong, detailed, and well-supported investigation. . . . A highly recommended and accessible read, not just for scholars of Peruvian archaeology, but also anyone interested in comparative urban studies of any period.”—Canadian Journal of Latin American and Caribbean Studies

"Defines the Casma culture and demonstrates its importance in late Andean prehistory for the north coast of Peru. Vogel's pioneering work at El Purgatorio sets the stage for anticipated future studies."--Thomas Pozorski, University of Texas-Pan American

"This detailed study fills a major gap in coastal Andean prehistory while also addressing broader issues of ancient urbanism and the variability of urban forms in preindustrial societies."--Daniel H. Sandweiss, University of Maine


The Casma state, which flourished on the north coast of Peru in the centuries before European contact, is an important and vastly understudied pre-Inca culture. In this volume, Melissa Vogel situates El Purgatorio--the capital city and largest Casma culture site--within the larger spatial and temporal context of the region and compares it to other pre-Hispanic cities of the Americas. She chronicles the rise and fall of the city, from its establishment and apogee to its conquest and ultimate abandonment, a period of dynamic transition in Andean history.

Vogel's investigation ranges through this extensive, monumental urban site, considering its architecture and spatial organization from the perspective of architectonics and proxemics. She also looks at religious and mortuary rituals, establishing a baseline for future studies of Casma religion and ideology. Her examination of the urban economy includes both internal economic organization and trade with neighboring polities, with focus on craft industries such as weaving, metallurgy, beer brewing, and bead-making, as well as agriculture and the harvesting of marine resources. Using findings from the material culture, Vogel tells us about the residents of El Purgatorio, including crucial components of identity and status, and interprets their living conditions based on pathologies present in the burial populations and the artifactual remains of daily life.

A culmination of Vogel's sixteen-year study of Casma culture, this book helps us understand the relationships between polities of the ancient world, how they built connections to other towns or cities outside and within their own boundaries, and demonstrates the importance of cities and urbanism in the development and collapse of complex societies.


Melissa A. Vogel, associate professor of anthropology at Clemson University, is the author of Frontier Life in Ancient Peru: The Archaeology of Cerro la Cruz.

A volume in the series Ancient Cities of the New World, edited by Michael E. Smith, Marilyn A. Masson, and John W. Janusek

A strong, detailed, and well-supported investigation. . . . A highly recommended and accessible read, not just for scholars of Peruvian archaeology, but also anyone interested in comparative urban studies of any period.
--Canadian Journal of Latin American and Caribbean Studies