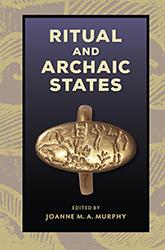 Edited by Joanne M. A. Murphy


"An important addition to our understanding of early states. The contributors amply demonstrate through their fresh insights how crucial ritual is to statecraft in the Old and New Worlds."--Peter N. Peregrine, coeditor of Ancient Human Migrations

"Essential and fascinating. This book more than any other before brings the subject of ritual and polity of archaic states together."--Evangelos Kyriakidis, editor of The Archaeology of Ritual


Within archaic states, rituals--both secular and sacred--frequently command considerable investment of time, space and energy. The contributors suggest that the nature of rituals, the level of investment in them, and their sociopolitical significance can vary greatly from state to state, even among societies with similar levels of social complexity, population, and spatial distribution. They highlight the importance of ritual as an inherent part of a cultural narrative, not just in past societies but also in present societies. The contributors also demonstrate how the study of ritual enables a better understanding of diverse social groups. Even within close neighboring states, the location, frequency, and role of ritual differed significantly.

Joanne M. A. Murphy, associate professor of classical studies at the University of North Carolina at Greensboro, is the editor of Prehistoric Crete: Regional and Diachronic Studies on Mortuary Systems.