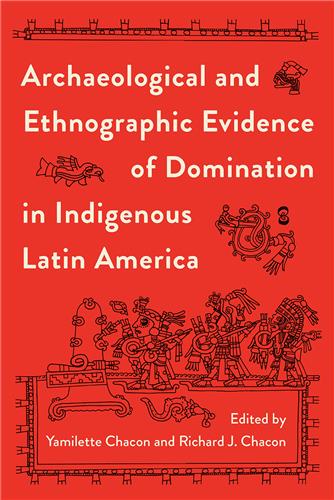 Archaeological and Ethnographic Evidence of Domination in Indigenous Latin America

“Following a particular thread of the role of violence in power arrangements, contributors address a range of settings and scales, from practices of domestic violence in ethnographic Amazonia to the origins of Inca imperial expansion in an unstable phase of elite factionalism. Thoughtfully discussed, the high-quality essays assembled here offer much of value to those with an interest in conflict and power, both past and present.”—Elizabeth N. Arkush, author of War, Spectacle, and Politics in the Ancient Andes

This volume explores the nature of power relations and social control in Indigenous societies of Latin America. Its chapters focus on instances of domination in different contexts as reflected in archaeological, osteological, and ethnohistorical records, beginning with prehistoric case studies to examples from the ethnographic present.

Ranging from the development of nautical and lacustrine warfare technology in pre-contact Mesoamerica to the psychological functions of domestic violence among contemporary Amazonian peoples, these investigations shed light on how leaders often use violence or the threat of violence to advance their influence. The essays show that while social control can be overt, it may also be veiled in the form of monumental architecture, fortresses or pukara, or rituals that signal to friends and foes alike the power of those in control. Contributors challenge many widely accepted conceptions of violence, warfare, and domination by presenting new evidence, and they also offer novel interpretations of power relations at the domestic, local, and regional spheres.

Encompassing societies from tribal to state levels of sociopolitical complexity, the studies in this volume present different dimensions of conflict and power found among the prehistoric and contemporary Indigenous peoples of Latin America.

Yamilette Chacon is a lecturer in sociology at James Madison University. Richard J. Chacon, professor of anthropology at Winthrop University and is coeditor of Feast, Famine or Fighting? Multiple Pathways to Social Complexity.