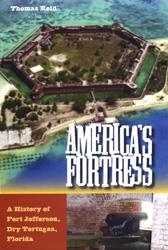 "America's Fortress offers a compelling narrative of the people who envisioned, constructed, and garrisoned this important military installation . . . Reid brings to life the human experience of the fort that pulsated inside the enduring walls of brick and mortar."--Peter S. Carmichael, University of North Carolina at Greensboro, author of The Last Generation: Young Virginians in Peace, War, and Reunion

Known as the "American Gibraltar," Fort Jefferson, located in the Dry Tortugas, Florida, was the most heavily armed coastal defense fort in United States history. Perceived as the nation's leading maximum-security prison, the fort also held several of the accused conspirators in the Lincoln assassination. America's Fortress is the first book-length, architectural, military, environmental, and political history of this strange and significant Florida landmark.

This volume also fills a significant gap in Civil War history with regard to coastal defense strategy, support of the Confederacy blockade, the use of convicted Union soldiers as forced labor, and the treatment of civilian prisoners sentenced by military tribunals. Reid argues that Fort Jefferson's troops faced very different threats and challenges than soldiers who served elsewhere during the war. He chronicles threats of epidemic tropical disease, hurricanes, shipwrecks, prisoner escapes, and Confederate attack. Reid also reports on white northerners' perceptions of slaves, slavery, and the emerging free black soldiers of the latter years of the war. Drawing on the writings of Emily Holder, wife of Fort Jefferson's resident surgeon, Reid is the first to offer a female perspective on life at the fort between 1859 and 1865.

For history buffs and tourists, America's Fortress offers a fascinating account of this little-known outpost which has stood for over 150 years off the tip of the Florida Keys.

Thomas Reid (1947-2020) was lecturer in American history at Lamar University in Beaumont, Texas. He is the author of Spartan Band: Burnett’s 13th Texas Cavalry in the Civil War and articles about the military history of the American Civil War.

A useful book for anyone interested in America's coast defenses or in Civil War.
--The Nymas Review: A Publication of the New York Military Affairs Symposium

…a fascinating and well-written blend of social, political, and military history of a historic site that few know about.
--Civil War News

" Reid has provided an easily readable chronical of Fort Jefferson's unique past, and his work will be useful to those interested in but unfamiliar with this aspect of Florida." history."
--The Journal of Southern History