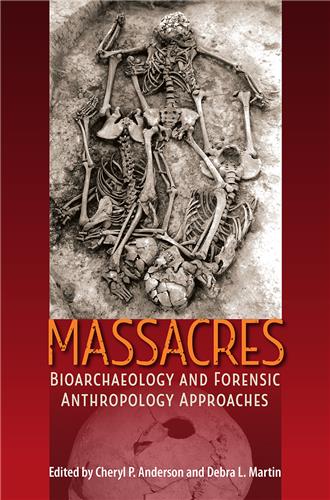 
“Anderson and Martin’s thought-provoking volume has provided a means for correcting injustices for future anthropological studies of mass violence.”—Current Anthropology

“An excellent introductory volume. . . . Effectively synthesizes the collective power of the discipline and will constitute a worthwhile addition to the library of any practitioner concerned with violence, the application of theory to construct holistic patterns of behavior, and collective social deviance.”—Midcontinental Journal of Archaeology

“A book of great scope. Researchers of different disciplinary backgrounds problematize a simple question: What constitutes a massacre? Is it the number buried, their demographics, the cause of death, or the treatment of remains? This book represents a new foundation for the study of massacres.”—R. Brian Ferguson, editor of The State, Identity and Violence: Political Disintegration in the Post-Cold War World

“The first coming together of bioarchaeological and forensic perspectives on mass killings. It emphasizes the importance of context—not only where and how bodies are found but also the contemporary forces influencing their interpretation.”—Rebecca C. Redfern, author of Injury and Trauma in Bioarchaeology: Interpreting Violence in Past Lives

This volume integrates data from researchers in bioarchaeology and forensic anthropology to explain when and why group-targeted violence occurs. Massacres have plagued both ancient and modern societies, and by analyzing skeletal remains from these events within their broader cultural and historical contexts this volume opens up important new understandings of the underlying social processes that continue to lead to these tragedies.

In case studies that include Crow Creek in South Dakota, Khmer Rouge–era Cambodia, the Peruvian Andes, the Tennessee River Valley, and northern Uganda, contributors demonstrate that massacres are a process—a nonrandom pattern of events that precede the acts of violence and continue long afterward. They also show that massacres have varying aims and are driven by culture-specific forces and logic, ranging from small events to cases of genocide. Many of these studies examine bones found in mass graves, while others focus on victims whose bodies have never been buried. Notably, they also expand widely held definitions of massacres to include structural violence, featuring the radical argument that the large-scale death of undocumented migrants in Arizona’s Sonoran Desert should be viewed as an extended massacre.

This is the first volume to focus exclusively on massacres as a unique form of violence. Its interdisciplinary approach illuminates similarities in human behavior across time and space, provides methods for identifying killings as massacres, and helps today’s societies learn from patterns of the past.


Cheryl P. Anderson, lecturer of biological anthropology at Boise State University, is coeditor of Bioarchaeological and Forensic Perspectives on Violence: How Violent Death Is Interpreted from Skeletal Remains. Debra L. Martin, Distinguished Professor of Anthropology at the University of Nevada, Las Vegas, is coeditor of The Bioarchaeology of Violence.

A volume in the series Bioarchaeological Interpretations of the Human Past: Local, Regional, and Global Perspectives, edited by Clark Spencer Larsen